Time to say I told you so, Sotto taunts ‘Mr. Noted’ 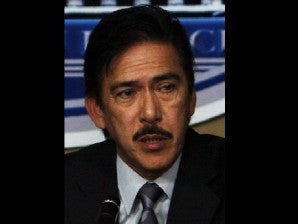 By his reckoning, it’s the perfect time to say “I told you so.”

Sotto pointed out that Pangilinan’s action came seven years late—long after Gloria Macapagal-Arroyo had completed her presidency and her closest opponent, actor Fernando Poe Jr., had died—and now that a number of witnesses had volunteered to testify in court on the purported fraud.

And it doesn’t matter that Pangilinan is the husband of his goddaughter, celebrity Sharon Cuneta, said Sotto, who was Poe’s campaign manager. “I’m just calling a spade a spade,” he said.

Sotto recalled that as a member of the national board of canvassers in 2004, Pangilinan merely replied “noted” to persistent requests by the opposition to scrutinize election returns (ERs) purportedly indicating fraud.

Then Senate President Franklin Drilon and then Speaker Jose de Venecia Jr. headed the national canvassing board that proclaimed Arroyo winner of the 2004 presidential election.

Pangilinan has issued a statement calling on the Department of Justice (DOJ) and the Commission on Elections (Comelec) to “dig deep and leave no stone unturned” in looking into fresh allegations that Arroyo stole the vote in 2004.

Comelec spokesperson James Jimenez earlier said the two agencies had agreed in principle to conduct a joint inquiry and were in the process of firming up rules and other details.

“Walang sinuman ang dapat santuhin dito (There should be no sacred cows),” said Pangilinan, who was ridiculed as “Mr. Noted” during the 2004 canvassing of votes for president.

“In a democratic process, it is through an election that the citizens are given a voice in governance. To make a mockery of this process is to make a mockery of democracy. The public deserves no less than the whole truth,” he said.

He said questions over the authenticity of the ERs could have been settled if only Pangilinan and then House Majority Leader Neptali Gonzales, also a member of the canvassing board, allowed the opening of just one such document during the canvass.

“But they were blocking us every step of the way,” he said.

Sotto said his camp was particularly pushing for the opening of ERs in Pangasinan, Cebu, Iloilo and the Autonomous Region in Muslim Mindanao.

He said some areas in Cebu, for instance, recorded a voter turnout higher than the number of registered voters.

Pangilinan explained that as a member of the canvassing board in 2004, he decided “on the basis of the evidence available.”

“All the evidence now surfacing seven years later was not available then,” he said. “In 2004, we did not know about ‘Hello Garci,’ but when we learned about the taped conversations in 2005, out of principle, we did not hesitate to condemn the acts of [Arroyo] then and called for her immediate resignation.”

He added: “In keeping with this principled position, we refused a slot in the administration ticket in 2007 and opted to run as an independent.”

Pangilinan also said that with witnesses now available, he was also “interested in the whole truth because it will be a chance for those involved in cheating to be unmasked.”

At a news conference in E.B. Magalona, Negros Occidental, Senator Drilon said that as Senate president and cochair of the canvassing board in 2004, he was not aware of a purported operation to replace genuine ERs with fake ones to ensure an Arroyo victory in the event of a recount.

He said the board’s role at that time was just to report the election results as given.

Drilon said, however, that those found guilty of electoral fraud should be punished in order to serve as an example to those who would attempt to do the same in the future.

He said he was supporting the joint inquiry to be conducted by the DOJ and the Comelec into the alleged fraud in the 2004 and 2007 elections.

Drilon said the planned inquiry would be part of “a cleansing process.”

“I am confident that it will not be just another investigation with no conclusion, as experienced in the past,” he said, adding:

“In the past we did not have the environment that would lead to a successful prosecution. We easily forget that the past administration issued Executive Order 464, which effectively prevented the legislature from exercising its oversight functions.”

EO 464, issued by Arroyo on Sept. 26, 2005, barred Cabinet members, police and military brass, senior national security officials and “such other officers as may be determined by the President,” to attend congressional hearings without permission from her office.

Drilon said inquiries into poll fraud were necessary even if some people were pessimistic about their outcome.

“I am confident that the new Ombudsman (Conchita Carpio-Morales) will perform her constitutional mandate of cleaning up our government of all these shenanigans,” he said. With a report from Carla P. Gomez, Inquirer Visayas