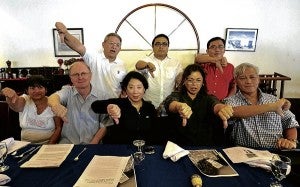 This was the assertion made by a group of civic leaders and environmental advocates who are opposing plans approved last year by the Manila city council to reclaim and turn parts of the bay into a bustling commercial hub.

It was basically the same group that successfully campaigned against similar projects planned for the bay 21 years ago.

Petition in the works

In a press conference at Manila Yacht Club, Ho said the group had initiated a petition which will later be submitted to the city council for its action.

The contract covers an area between the CCP complex and the US Embassy, the group noted.

“There was no public consultation about the resurgence of the project and it was done silently,” Ho said.

Ho noted that Alfredo Lim was also the Manila mayor when the group campaigned against reclamation projects on the bay in 1992.

The coalition members warned that the reclamation project would do more harm than good. Citing studies made by leading geologists, they said the project could worsen flooding in Manila and put the bay area at “the highest risk of liquefaction in earthquake scenarios.”

“It is extremely important for all stakeholders to understand how these reclamation plans will impact on our human communities and heritage,” Ho said.

The bay area is, in a way, “sacred” since it is declared a national historical landmark and protected by Republic Act 1006 and the National Cultural Heritage Act of 2009, she added.

The group members cited a Gold Coast corporate video which was presented last month in a forum held by the Archdiocese of Manila’s Ministry of Ecology.

In the video, they said, the project dubbed Solar City is being promoted as a solution to Manila’s lack of space for new developments and a boost to the city’s economy and tax revenues.

The coalition said the city government should instead draw up a plan that would maximize the potentials of waterfront areas without spoiling their natural state, for the enjoyment of the people regardless of their economic status.