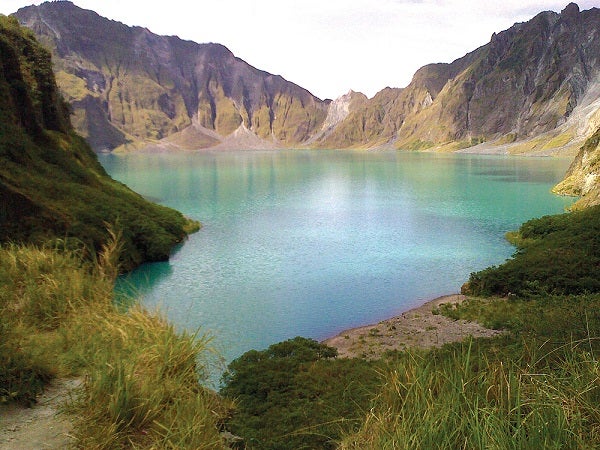 THE MAYOR of Capas, Tarlac, the most popular route to the world-famous Mt. Pinatubo crater-lake, advises trekkers not to swim. A man drowned there on Jan. 2. TONETTE T. OREJAS/INQUIRER Central Luzon

CITY OF SAN FERNANDO—Mt. Pinatubo is best for trekking, not for swimming. And don’t go there during heavy rain.

Mayor Antonio Rodriguez of Capas, Tarlac, aired this advice on Friday after a 44-year-old man drowned at the volcano’s crater-lake on Jan. 2.

Roselito Julao ventured into Mt. Pinatubo via Barangay Sta. Juliana in Capas, the most popular route to the volcano straddling the boundaries of Tarlac, Pampanga and Zambales.

A local guide, Orlando Herrera, told police investigators that Julao and his companions reached Barangay Sta. Juliana, the takeoff point of the trek at 6:30 a.m.

“Upon reaching the area, the victim suddenly swam in its crater [lake] despite the presence of a warning sign prohibiting swimming,” a report to Senior Supt. Alfred Corpus, Tarlac provincial director, showed.

Herrera said he had advised Julao not to swim but the latter ignored his warning.

Rodriguez said Julao “might have died from a heart attack because when the guides and his companions fished him out of the water, blood oozed from his nose and mouth.”

Corpus said Julao’s wife did not have the victim’s body autopsied. She informed the police that he took regular medication for a heart problem.

Julao’s kin in Mabalacat, Pampanga, believed he drowned, a friend of the family told the Inquirer.

Rodriguez said Julao was the first drowning victim at the crater-lake. The lake formed when rainwater pooled at the volcano’s summit that sank after the eruptions from 1991 to 1993.

The crater was 2.7-km wide—and its lake water 87-meter deep and 3 meters away from the rim—in August 2001 when the Department of Public Works and Highways and the Philippine Institute of Volcanology and Seismology (Phivolcs) drained it by digging a canal on the Maraunot notch to avoid lahar avalanches on Botolan, Zambales.

Between 1995, when treks to the volcano began, and 2012, three foreigners and four Filipino hikers had drowned at O’Donnel River in Capas and Pasig-Potrero River in Pampanga that both drained from the volcano’s watersheds.

In the recent incident, Rodriguez said, “there were enough public safety measures but these were ignored.”

He said the swimming ban is announced through a billboard set up at the hill before the descent to the crater-lake. Guides among Aetas and farmers are also trained to enforce the ban.

Tourists are required to report their medical condition in a visitor’s form that they fill up when they register at the tourism satellite office in Sta. Juliana.

“Pinatubo trekking is not for everybody, only for those who are physically fit,” said Marissa Vidal, municipal tourism head.

The Department of Tourism has issued advisories warning against trekking during rainy days for risks of landslides and strong water currents at O’Donnel River.

And Phivolcs also warned against drinking the lake’s water because it is laden with sulfur. Tonette Orejas, Inquirer Central Luzon