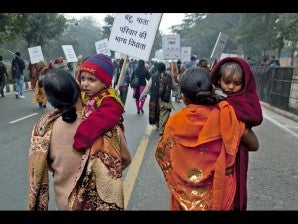 Indian women carry their children as they march during a protest to mourn the death of a gang rape victim in New Delhi, India, Wednesday, Jan. 2, 2013. India’s top court says it will decide whether to suspend lawmakers facing sexual assault charges as thousands of women gathered at the memorial to independence leader Mohandas K. Gandhi to demand stronger protection for their safety. (AP Photo/ Dar Yasin)

THIRUVANANTHAPURAM, India–The father of a student in south India has complained to police after Internet users circulated a photo of his daughter on social media claiming it was the Delhi gang-rape victim, officers said Friday.

A picture tribute to the dead Delhi woman, who was repeatedly raped on a moving bus on December 16 and thrown out of the vehicle in a crime that appalled the nation, has gone viral on Facebook.

Her name and identity have been withheld by police and the media in line with a law that entitles victims of sex crime and their families to anonymity to protect them from social stigma.

Vinayakumar, an assistant commissioner in the cybercrime unit of Kerala police in south India, said that the photo used in the Facebook tribute was fake and had caused distress.

“We have received a complaint from the father stating that the photograph uploaded on Facebook as the Delhi rape victim picture was fake,” the officer, who goes by one name, told AFP.

“The picture used was his daughter’s photograph uploaded with her Facebook profile. We have directed Facebook officials to delete the photograph and help us to track the culprits,” he added.

The brutal gang-rape of the 23-year-old medical student in New Delhi on December 16 has led to a bout of national soul-searching over the treatment of women in Indian society and provoked daily protests.