‘My ninong shot me’ 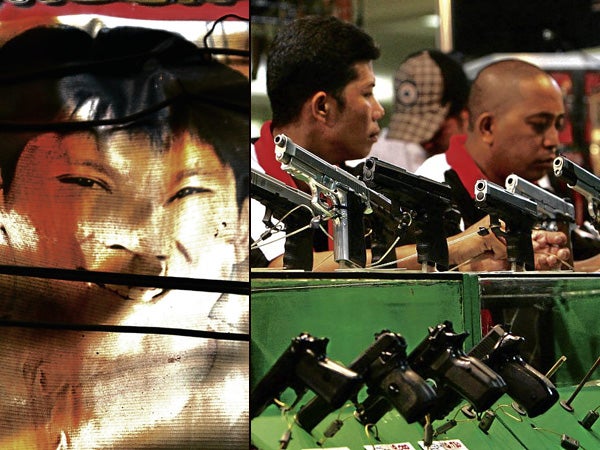 GUN CRAZY, GONE MAD Mass shooter Ronald Bae once ran for village chief in Kawit, Cavite, as shown on a tarpaulin bearing his image (at left). Bae went on a shooting rampage on Friday killing eight people and wounding nine others before being gunned down by responding lawmen. The killings prompted the usual calls for stricter gun control. Pistols are displayed (at right) during one of the regular gun shows held yearly in Mandaluyong City. EDWIN BELLOSILLO/ MARIANNE BERMUDEZ

That was the first thing 4-year-old Ken Cedric Caimol told his grandmother after the shooting. His sister KC was also shot.

The two children were wounded but survived. Their sister Micaela, 7, did not. She was hit in the chest when Ken’s godfather, Ronald Baquiran Bae, shot them with a .45-caliber 1911 pistol Friday morning.

Bae, 41, shot and killed eight other people and wounded nine others, including Ken Cedric and KC Caimol and two other children, before he himself was killed in a gun battle with police.

It was unclear why Bae, who contested and lost an election for village chair in Barangay Tabon I in Kawit town, Cavite province, in 2010, went on a rampage.

But his rage reminded residents of Tabon I of the shooting at Sandy Hook Elementary School in Newtown, Connecticut in the United States, where 20 schoolchildren and six adults lost their lives on Dec. 14.

“He walked casually, without any word or any facial expression,” said witness Willy Salvador, a resident of the area.

The ordeal began just after 9 a.m. Friday. Bae knocked at a store and asked three children—the Caimol kids—who were there at the time for a certain Berto. Told that Berto was not there, Bae exploded. He whipped out his 1911 and fired at the kids.

The randomness of his targets was brutal.

From the store, Bae went down the alley in his neighborhood, shooting anyone in sight.

“It was random. He would fire at anybody who crossed his path,” said investigating officer Arnulfo Lopez of the Kawit police.

“It started at the store. From the corner he went to the store … All the kids he chanced upon, he just shot,” another investigator, Senior Police Officer 1 Roberto Genido, said.

According to residents of the area, Bae, clad in shorts and sando and carrying a 1911, walked about 200 meters from his house and back, passing by at least 70 houses. 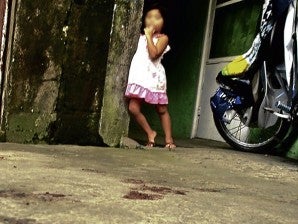 INNOCENT BYSTANDER A little girl looks bewildered by the blood stains marking the spot where a person fell during a shooting frenzy in Barangay Tabon I, Kawit, Cavite province, on Friday morning. EDWIN BELLOSILLO

Accompanying him was his house caretaker whom police identified as John Paul Lopez and who was seen reloading the 1911 whenever it ran dry.

Bae shot a barking dog, then the dog owner, 56-year-old Alberto Fernandez, as the man stood on his porch.

From the alley, Bae walked toward the nearby market, shooting more people.

“He shot the kids, who were 6, 7 years old. Then there was a pregnant woman and a dried-fish vendor from Rosario. He vented his ire on all of them,” Genido said.

“The pregnant woman was hit in the stomach. Last I heard, she was in critical condition,” he said.

The pregnant woman was later identified as Ria de Vera. Her 4-year-old daughter Jan Monico was among the wounded.

Bae’s attacks lasted about 30 minutes. He walked back to his house and got there just as police arrived and called to him to surrender.

“He opened fire on the police. So a gun battle ensued, which resulted in the death of [Bae],” Lopez said.

“He really was shooting it out [with the police],” Genido said. “He kept firing. He no longer recognized anybody.”

In one exchange of fire with the policemen, Bae was hit and was killed.

Police reported nine people, including the four children, wounded. They were taken to hospitals, seven of them to the Philippine General Hospital in Manila.

Among those killed Friday was 20-year-old Al Orio, a taho vendor. He wounded Orio’s 16-year-old brother Antonio with a shot to the back.

The Orios are not residents of Tabon I, their mother Mila Orio said in an interview at PGH.

But at press time, Remulla reported that Lopez had been found and was in police custody. A radio report quoted Lopez as saying a family problem drove Bae to go on a killing spree.

Remulla said Bae had once served on a local council but was also a known drug dealer and had been taking methamphetamines since New Year’s Eve.

Bae, Remulla said, left his Kawit neighborhood a year ago after losing the barangay election, but returned on Monday due to a problem with his wife, whom he had left in Pampanga province before New Year’s Eve.

Neighbors said Bae and Lopez had been drinking all night.

Senior Supt. Dionisio Borromeo, deputy chief for administration of the Cavite provincial police, said a combination of “depression, alcohol and drugs” might have caused Bae to snap.

Borromeo said police found “drug paraphernalia” in Bae’s house. They also found an expired license for an M-16 rifle, but not a license for Bae’s 1911 pistol.

Neighbors said Bae, who reportedly owned a poultry farm in the area, was a neighborhood bully who fired his gun at the slightest provocation.

The Inquirer learned he returned to his Kawit home on Jan. 2 from Pampanga province where he reportedly lives with his family.

Bae’s shooting frenzy came about as the administration of President Aquino considered a fresh crackdown on unlicensed firearms in the country following the death of 7-year-old Stephanie Nicole Ella from celebratory gunfire on New Year’s Eve.

Nicole’s death triggered outrage and condemnation of poor law enforcement that allows hundreds of thousands of unregistered firearms to be on the streets.

“There is a lot of people with guns here. There are civilians with guns, even without official permits to carry. They can find a way,” Rollon said.

There are 1.2 million registered firearms in the Philippines as of last year, according to data from the police firearms and explosives office.

There were another roughly 600,000 unlicensed firearms in circulation across the country, according to the office’s records. With reports from DJ Yap and Nancy Carvajal in Manila and AFP

Read Next
242 gun owners living in Nicole neighborhood
EDITORS' PICK
Driving can be even more rewarding this New Year — here’s why
New Year, New Rediscoveries
Who should we trust in vaccines? Comedians?
Pfizer’s EUA stays as FDA awaits report on Norway deaths — DOH
BSP chief on medical leave to remove blood clot after ‘minor head accident’
Experience clearer calls nationwide with Smart VoLTE
MOST READ
‘I was betrayed’: Crisha Uy reacts to love life of ex Joem Bascon
3 PMA cavaliers disappointed over vaccination mess
Roque: ‘If public won’t trust experts on vaccines, who must they trust? Not comedians’
IATF eyes shift to ‘new normal’ for areas without Covid-19 transmission
Don't miss out on the latest news and information.