Suspended Cebu gov gets to argue in court 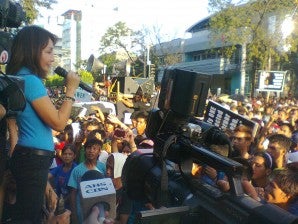 Suspended Cebu Gov. Gwendolyn Garcia reiterates that her suspension is illegal before a crowd of 1,000 supporters who staged a “Freedom March” from Fuente Osmena to the Cebu provincial capitol on Sunday. Photo by Carmel Loise Matus

Suspended Cebu Gov. Gwendolyn Garcia did not get the temporary restraining order (TRO) she had been praying for but the Court of Appeals on Wednesday ordered oral arguments on her petition next week.

The appellate court’s 12th Division on Wednesday decided to hold in abeyance Garcia’s petition for a TRO on the six-month suspension meted out on her by the Department of the Interior and Local Government.

In a two-page resolution written by Associate Justice Vicente Veloso of the 12th Division, the respondents in the case were ordered to file their comments to Garcia’s petition within 10 days from receipt of the notice.

The oral arguments will be heard on Jan. 10 at 10 a.m. in the Court of Appeal’s session hall.

The respondents in the case include the late Cebu Vice Gov. Gregorio Sanchez Jr., who filed the suspension case against Garcia, the Office of the President, Executive Secretary Paquito Ochoa Jr., Interior Secretary Mar Roxas and the Department of the Interior and Local Government.

In coming out with its ruling, the appellate court acted on the petition for review with application for TRO/status quo order and writ of preliminary injunction that Garcia filed on Dec. 20.

Since her suspension last month based on Sanchez’s complaint, Garcia has continued to defy the order and has barricaded herself in the Cebu provincial capitol even through the Christmas and New Year holidays.

She said she would only leave the premises if the authorities bodily removed her.

In its resolution, the appellate court noted the respondents’ urgent motions for leave and opposition to the TRO which they filed on Dec. 28, as well as their opposition to the issuance of a TRO and/or status quo ante order.

The resolution was concurred in by Associate Justices Jane Aurora C. Lantion and Eduardo Peralta Jr.