Over 90% of poll respondents favor divorce in PH 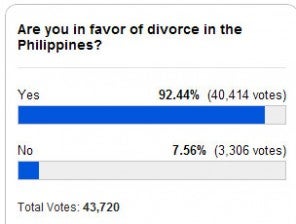 MANILA, Philippines–Over 90 percent of INQUIRER.net readers who answered a poll in the website are in favor of divorce in the Philippines.

Only 7.56 percent or 3,306 of poll participants were against divorce.

The poll came out after the controversial Reproductive Health Bill was passed in Congress.

A divorce bill or House Bill No. 1799 was re-filed by Gabriela party list shortly when the 15th Congress started and remained pending at the House of Representatives.

The measure called for “married couples in irreparable marriages another legal remedy that they can resort to in addition to the country’s existing laws on legal separation and annulment.”

Gabriela has been pushing for divorce since the 13th Congress.

The Philippines is the only nation in the world without a divorce law aside from the Vatican.