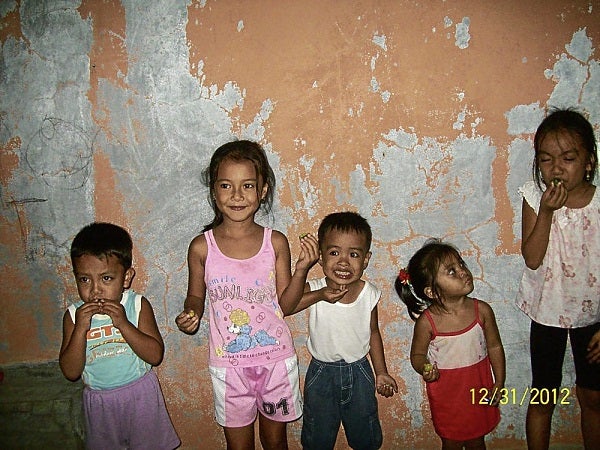 PRETTY IN PINK Stephanie Nicole Ella (second from left), her 5-year-old brother Ken and her cousins eagerly await New Year’s Eve outside their home in Caloocan City unaware that she would be hit by a stray bullet at midnight. Note date on photo at right. PHOTO COURTESY OF ELLA FAMILY

Stephanie Nicole Ella, the 7-year-old girl who was hit in the head by a stray bullet while watching the fireworks show outside her Caloocan City home on New Year’s Eve, fought for 38 hours to stay alive.

“Let’s stop. She has suffered enough,” Bueno quoted Nicole’s father, Aquilino, as telling the doctors who were trying to revive the girl after her eighth cardiac arrest. Nicole had been suffering a series of cardiac arrests since 5 a.m. Wednesday.

“Her parents are understandably upset. Their daughter died because of the senseless indiscriminate firing of a very irresponsible person,” the doctor said.

When Nicole was wheeled out on a gurney to the hospital morgue, her small body was wrapped in a green Spongebob Squarepants blanket. The cartoon character was one of her favorites, her father said.

“We just want to take her home,” said Aquilino. He said the wake for his daughter would be held at the family residence in Barangay (village) Malaria, Tala, Caloocan City.

Asked what his daughter liked to do, Aquilino smiled and said that Nicole loved books, particularly coloring books, and usually watched movies of Barbie.

“The last thing she was busying herself with was watercolor painting using her fingers,” he recalled, adding that Nicole loved coloring with crayons.

Aquilino said he had only one regret, that he was not able to grant Nicole’s last wish for him to carry her while they watched the fireworks on New Year’s Eve.

“But I could not carry her that time because I was already carrying her brother and I told her that she was too big,” he said.

He renewed his appeal for witnesses to come forward and identify the shooter. “I hope that this does not happen to his own children,” he said of the gunman.

Several hours before Nicole died, Bueno told the Inquirer that she was in the deepest level of coma under the Glasgow coma scale. This meant that her heart was the only organ keeping her alive.

“She could no longer breathe without the respirator and her heart was the only organ functioning,” the doctor explained.

The heart is the very last organ to stop functioning in the human body, Bueno said.

He said that while there have been cases of patients who have had cardiac arrests while in the deepest level of coma being revived, this was very rare.

By 2 p.m. Wednesday, Nicole had suffered her eighth cardiac arrest and intervals between her heart stopping and being revived through cardiopulmonary resuscitation (CPR) had become very close.

“We asked the parents if they wanted us to continue to resuscitate Nicole. They saw that the girl was already suffering and asked our doctors to stop reviving her,” Bueno told reporters, explaining that the staff had been giving the girl CPR for 20 minutes with no response.

“At that point, we did not see any way for the girl to come back,” the doctor said.

Philippine National Police chief Director General Alan Purisima on Wednesday assured the Ella family that the police would stop at nothing to identify and arrest the shooter.

“Your police will do everything it can to resolve the case (of Stephanie Nicole) and the other victims of stray bullets,” he said.

“We have already assigned police investigators to each of the incidents of indiscriminate firing. We expect them to resolve these cases as soon as possible,” said Purisima, adding that the Mandaluyong police had already arrested the suspect in the killing of 4-year-old Ranjilo Nemer.

The PNP chief said he was not satisfied with the police’s failure to gather enough information and evidence that would lead to the identification and arrest of the people behind the indiscriminate firing of guns.

“They (the police) need to focus on these cases and make those responsible for these answer for their crimes,” he said.

Purisima said he had directed PNP field commanders to identify the registered gun owners within the vicinity of areas where victims were hit by stray bullets and check if they had fired their guns.

He said the community also needed to help, noting that witnesses could have been standing only a few hundred meters away from the people who fired the guns.

“If you happen to see or hear about a certain individual who fired his gun during New Year’s Eve, you can inform the nearest police station so we can check if that person could be responsible for the bullet that hit the victims,” Purisima said.

He said he was also thinking of creating a database of individuals who have been involved in indiscriminate firing in the past to help the police prevent similar incidents in the future.

“Once they try to fire their guns, the police will arrest them on the spot. But we need the active cooperation of the community to do this,” he said. With a report from Marlon Ramos