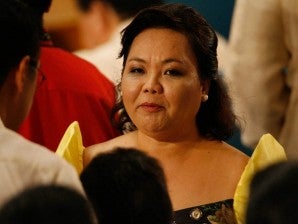 Though some of her colleagues in the House of Representatives are branding it “patronage politics,” Akbayan Rep. Arlene “Kaka” Bag-ao on Wednesday defended her role as a conduit for funds for pork projects in Dinagat Island, saying any benefit it may have to her run for the district’s congressional seat next year was only “incidental.”

But Alliance for Concerned Teachers Rep. Antonio Tinio called the release of P140 million from the Priority Development Assistance Fund (PDAF) to Dinagat through Bag-ao, an ally of President Aquino, “patronage politics,” just like the practice during the Arroyo administration.

The PDAF is pork barrel that channels funds to congressional districts.

The Department of Budget Management (DBM) released the P140 million to Dinagat last month, six months after the province’s representative in Congress, fugitive cult leader Ruben Ecleo Jr., was dropped from the roster of the House of Representatives.

Ecleo lost his House seat after the Supreme Court affirmed a Sandiganbayan ruling finding him guilty in a graft case involving infrastructure projects in San Jose, Surigao del Norte, where he served as mayor from 1991 to 1994.

The Sandiganbayan sentenced Ecleo to 18 to 31 years in prison and ordered him to pay P2.8 million to the government.

Ecleo, leader of the cult Philippine Benevolent Missionaries Association Inc., was also convicted of murder in April in a case involving the death of his young wife in 2002.

Two congressmen, one a party-list representative and the other a lawmaker from Mindanao, got wind of the release of funds to Dinagat and criticized the DBM for channeling the money through Bag-ao, calling it “politically tainted.”

They also criticized the designation of Bag-ao as caretaker for Dinagat, pointing out that she is running for the province’s seat in the House in May’s midterm elections.

But Bag-ao said her facilitating the release of funds for projects in Dinagat was part of her job as caretaker of the province.

“If it has any implications for the forthcoming elections, that is incidental… They shouldn’t put any color to it,” Bag-ao said in a phone interview.

“My running in the coming elections is just incidental. I’m doing it because of my appointment as caretaker. It’s an honor that I have been able to help bring projects to Dinagat,” she said.

Bag-ao said her designation as caretaker of Dinagat came first, when Ecleo’s case was still pending, and her decision to run for the province’s seat in the House just followed.

But Tinio sees patronage politics in Malacañang’s releasing funds to Dinagat through Bag-ao.

“It’s a reality of patronage politics that Malacañang makes use of its power to release or withhold pork barrel in the amounts, the timing and to whom it so chooses  to exert influence on the legislature, make or break election campaigns and build or destroy political bailiwicks,” Tinio said in a text message to the Philippine Daily Inquirer.

“P-Noy (Aquino) is no different from Arroyo in this regard,” Tinio said. “The release to Akbayan Representative Bag-ao and the nonrelease to Makabayan representatives are clear and undeniable examples of this,” he said.

Tinio belongs to the Makabayan bloc of party-list representatives, most of whom were deprived of their P70-million share of the PDAF.

San Juan Rep. Joseph Victor Ejercito said the Liberal Party abused its power when it went against the norm and assigned a party-list representative as caretaker for Dinagat.

“The practice is that it is usually given to a caretaker representative, preferably the closest to the area,” Ejercito said. “I think that should have been followed so intrigues can be avoided.”

But Bag-ao said it was Belmonte’s prerogative to decide whom to appoint to look after a district. She said she was a logical choice because she comes from the province.

She also embraced the role because she said it would give her a chance to return  to her province and help. She said she would continue to fulfill the role even if she was not running.

Bag-ao said her facilitation of the projects for the province may help the people there know her more. But she added that even as Akbayan representative, people from Dinagat already know her, as she had been helping it through the party-list group’s programs.

The residents also know her as the lawyer for the Sumilao farmers, who marched from Bukidnon to Manila to fight for the land they tilled, she said.

Bag-ao also said what was more important to her was the judgment of the people from Dinagat, who are happy that the province has finally been receiving the help it badly needs. Most of the projects funded by the pork barrel have to do with the delivery of basic needs and social services, and constitute what the people have long been asking, she said.

Those criticizing her role should come to Dinagat so they can see for themselves that it really needs PDAF projects, she added.

Akbayan also came to Bag-ao’s defense, decrying the administration critics’ seeing politics in the release of funds for the Dinagat pork projects.

“It is sad that some only see the coming election with the release of the fund,” Akbayan said in a statement.

“It doesn’t do justice to the people of Dinagat, who have yet to recover from the devastation [caused by] typhoons even as they endure poverty and underdevelopment without their rightful share of the government’s resources,” Akbayan said.

Akbayan said Dinagat had not been receiving funds for projects because Ecleo had become a fugitive from the law.

“Clearly, for the last two years, the province and its [people] have been starving for government support,” Akbayan said. “The situation in Dinagat took a turn for the worse when it was hit by successive [Typhoons] ‘Pablo’ and ‘Quinta.’ These are the challenges that Representative Bag-ao [dealt with] upon assuming the responsibility for the  province,” it said.

Akbayan said all the pork projects went through barangay consultations and all the fund releases were accounted for and reported to Bag-ao’s office.