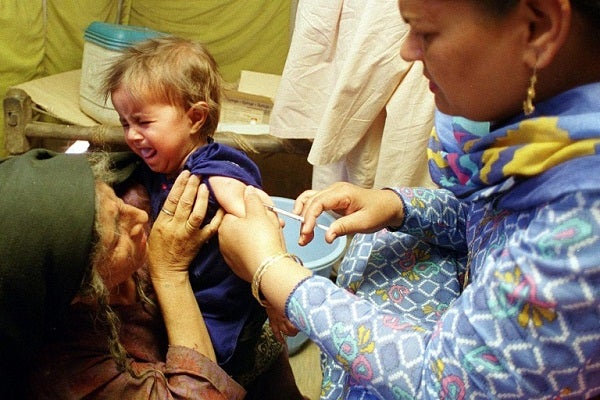 An Afghan refugee girl cries as a paramedic injects a measles vaccination in Lahore, 17 May 2002. A vaccination programme was launched by provincial Punjab government and UNICEF against measles in Afghan refugee camps near Lahore. Pakistan is still hosting about two million refugees who fled their homeland. (FILM) AFP FILE PHOTO/Arif ALI

KARACHI–More than 300 Pakistani children died of measles last year, a staggering increase on the previous 12 months and a result of three consecutive years of flooding, officials said Tuesday.

The United Nations’ World Health Organization said 306 children died of the highly infectious illness last year, 210 of them in the southern province of Sindh, where the worst floods occurred in 2010, 2011 and 2012.

The WHO said 64 children died of measles in Pakistan in 2011, 28 of them in Sindh. It was not immediately able to provide statistics for earlier years.

“Most of the affected children died due to post-measles complications such as pneumonia, post-measles encephalitis and diarrhea,” said WHO spokeswoman Maryam Yunus.

The UN body said most of the cases occurred between October and December in northern districts of Sindh, but was unable to provide a breakdown.

“Most of (the) children who have died because of suspected measles are reported from the districts affected by the floods for (the) last three years,” said Yunus.

She said WHO investigations had shown that malnourishment was a major reason for such a high number of deaths of children in Sindh.

“Floods, displacements and food shortages have played a major role behind these deaths,” she added.

A Pakistani health ministry official said more than half the deaths in Sindh occurred in the last three months of the year, with 50 children dying in December alone.

The official, who did not wish to be named, told AFP that the number of deaths in 2012 was “a record high”.

Pakistan on December 31 started a new measles vaccination drive in the worst affected areas, which will run until January 9, officials said.

Children under nine months are not eligible for the vaccine.