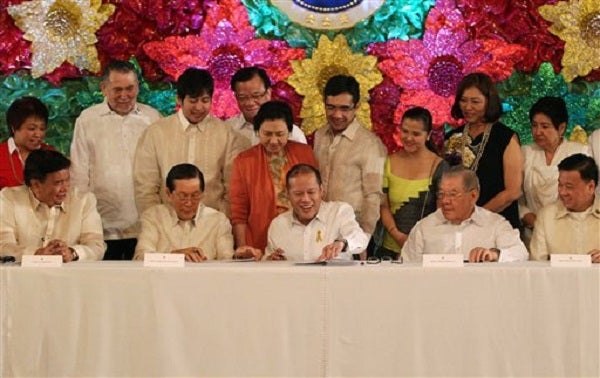 MANILA, Philippines—A “sin tax” on cigarettes and alcohol dampened the New Year party spirit when it was introduced in the Philippines Tuesday, as part of a government bid to boost finances.

Many stores started selling tobacco and drink at inflated prices before midnight, ahead of the official implementation of the tax hikes on January 1, hitting partygoers in the pocket.

Tax on cigarettes will gradually be raised to P30 ($0.72) per pack by 2017, roughly doubling the current price to around 52 pesos.

Duty on alcohol will also increase gradually until 2017, increasing the price of a bottle of beer by 23.50 pesos, with varying levels for other drinks including wine and spirits. It will be further increased by four percent each year thereafter.

“The new prices compared to countries like Singapore, for example, are still low, but for the ordinary Filipinos they are expensive,” said Laudemer Angeles, a 33-year-old shop owner in the town of Bacoor, south of Manila.

“Many of my customers were complaining about the higher prices and were not too happy when they bought their booze and smokes for their parties last night.”

Anti-smoking campaigner Emer Rojas said he hoped the new taxes would lead to a gradual decline in the number of people suffering from tobacco-related illness.

“I think the sin taxes should even be raised higher,” he told AFP. “But we commend President Aquino for showing his resolve in signing the law.”

The government has said that the country of 100 million has the highest incidence of smoking in the region, with tobacco-related diseases costing the country P177 billion ($4.3 billion) last year.

A large percentage of the money will go towards the government’s healthcare program.

The government first asked Congress to raise taxes on “sin” products as early as 1997, but a strong lobby by tobacco manufacturers stifled change.

The lobby included members of Congress representing tobacco-growing regions as well as powerful cigarette companies that enjoyed one of the lowest tobacco taxes in Southeast Asia.