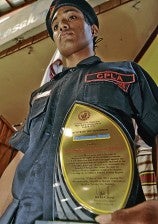 JORDAN Balweg was a baby when his father, slain rebel priest Conrado Balweg, formed the militia, Cordillera Peoples Liberation Army. He has been integrated into the military this week.
PHOTO COURTESY OF REDJIE CAWIS/PIA

More than 20 years later, Balweg’s 26-year-old son was officially integrated into the Philippine Army, along with 57 former members of CPLA, in a Dec. 29 ceremony in this military camp.

The integration of the CPLA members into the military fulfills a condition of a 2011 closure agreement for peace negotiations under the term of Aquino’s son, Benigno Aquino III.

Last year, Jordan had been supporting CPLA members in Kalinga who refused to submit to the government-brokered closure plan, believing it was not what his father wanted.

The Kalinga militiamen said the term “closure” meant terminating the “sipat,” a cessation of hostilities binding CPLA and the government while they negotiated terms for an autonomous region in the Cordillera.

The creation of the Cordillera Administrative Region in 1987 was the first step taken to fulfill this goal, but Jordan, in a 2011 letter to the Inquirer, said that closing the sipat forged in Mt. Data in Mt. Province “makes autonomy an impossible quest.”

The closure agreement was negotiated by the Office of the Presidential Adviser on the Peace Process and sets the protocol for the CPLA’s disarmament and conversion into a nongovernment organization.

But the CPLA’s Kalinga-based members protested the agreement at the Regional Development Council.

“I think this is the best thing for me—to defend the country. So I accepted the offer to be a soldier,” Jordan said.

He said it was not an easy decision to join the military. Villamor Visaya Jr., Inquirer Northern Luzon