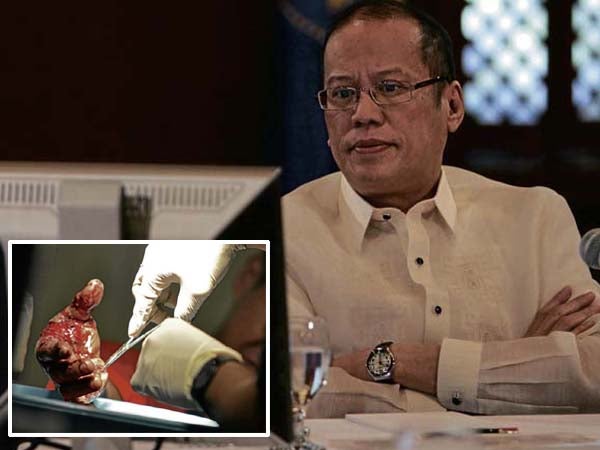 GRUESOME IMAGE After watching and listening to the presentation of measures taken by government agencies against illegal firecrackers, President Aquino wants the police to shut down permanently shops selling prohibited pyrotechnics that injure Filipinos, especially children. Photos of a bloodied hand like this (inset) have not discouraged Filipinos from greeting the New Year with a big bang. LYN RILLON

Ahead of the New Year revelry, President Benigno Aquino III on Sunday ordered police officials to throw the book at revelers exploding banned firecrackers and to shut down shops selling them for good.

The President specifically reminded Philippine National Police Director General Alan Purisima to highlight the charges filed against violators of Republic Act No. 7183 and the penalties meted out to them to show the government’s “seriousness.”

But Mr. Aquino indicated that apart from charging revelers with violation of RA 7183, which regulates the sale, manufacture, distribution and use of firecrackers and pyrotechnics, the PNP should explore filing charges of damage to property if the firecrackers became destructive.

During PowerPoint presentations by different agencies on their preparations for New Year, Mr. Aquino was particularly struck by the image of a huge 16-inch by 16-inch triangular firecracker, called “Goodbye Philippines.”

He wondered if that powerful cracker could damage roads, and Purisima said that it could.

“We should then explore [the charge] of damage to public property,” Mr. Aquino said, pointing out that the Department of Justice should have been present at the briefing.

After being told that the giant firecracker was seized from a store operating without a permit in Bulacan, the country’s firecrackers’ manufacturing capital, the President ordered local government officials to take the local government unit (LGU) to task.

“Why was something like this allowed to happen?” he said.

What came as a surprise was the finding by the Department of Health (DOH) that 59 percent of the children who suffered injuries from pyrotechnics got them from “piccolo.”

Piccolo sells for P10 to P15 a box. While they are labeled as manufactured in Bulacan, they are smuggled in from China, DOH officials said.

“Fifty-nine percent of children are getting injured because of this brand. It’s called piccolo. It’s considered banned because it’s actually imported,” Health Undersecretary Teodoro Herbosa said in his presentation.

The President wondered how children could “surreptitiously” buy the piccolos when they were banned.

Since Dec. 21, the DOH has received reports of 171 cases of firework-related injury. “We’re going lower than the previous year. But we cannot give a final [conclusion] until after Jan. 5,” Herbosa said.

The President also made clear to Purisima that manufacturers, retailers and dealers of banned firecrackers should be made to pay—either by closure or permanent revocation of their permits.

He asked: “Is there permanent banning from engaging in this business again if you sell all the banned items?” He observed that the penalty of six to 12 months or a fine of P20,000 to P30,000 or both was “very low.”

Purisima replied that retailers caught selling firecrackers were violating the terms of their permit. “So actually we can confiscate everything and close the shop. That’s the order I’ve [given to] the regional directors right now.”

When Mr. Aquino pressed if this meant that the shop would not be reopened, the PNP chief said that its permit would be revoked. And just to be sure, the President said the PNP should inform LGUs of their action against violators in case they apply for a new permit under a different name.

Mr. Aquino also instructed Purisima to highlight in the media the cases filed against violators and the status of the cases.

“There should be publicity of all the cases that had been filed, and status. We have to show we’re serious especially against indiscriminate firing of guns and explosion of firecrackers,” he said. “We have to show some are punished. We can’t call a time-out here where anyone can violate the law at around 11 p.m.”

The President said the campaign against firecrackers should begin by the last quarter of the year.

He expressed disbelief at the PNP data showing that shops were shut down only in one province, while the rest seemed to have complied with the law.

“I think Alan, our counterintelligence should be vetting all these regions also,” he said, addressing Purisima. “I think you should call up everybody once again and tell them, ‘I just noticed that there were many inspections, and yet we have piccolo.’ If they didn’t actually do these inspections, that’s one-strike.”

So far, government hospitals have sufficient stock of medicines for injuries during celebrations welcoming the New Year.

The President also instructed local government officials to share with the other LGUs the wisdom of ordinances adopted by Quezon City and Davao City banning firecrackers that sharply cut down the sale of firecrackers and the number of injuries.

The President’s message was to “put a stop to the manufacture, transport and sale on the prohibited ones,” Secretary to the Cabinet Rene Almendras said.

“We’ll know when the numbers come out on Jan. 5,” Almendras said on whether Mr. Aquino was satisfied with the measures taken by the different agencies.

“If the numbers will be better than last year then, good; if it’s not, then there’s nothing we can do about it. You know, what we need to do is to make sure it’s going to be lower in the future. So we must learn from the experience. The President called this meeting because he wanted to emphasize that he’s quite serious about these things,” he added.

A proposal from Maj. Renato Marcial of the Bureau of Fire and Protection for a total ban on firecrackers, a major cause of fire, would be discussed, Almendras said. Fire officials are also discouraging the use of sky lanterns.