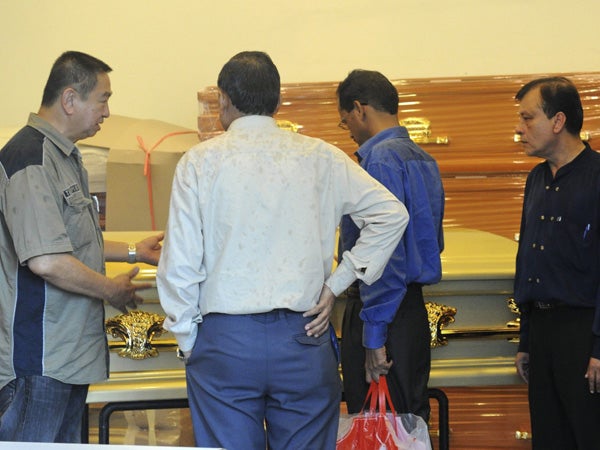 Officials (R) look at the coffin will contain the body of the dead Indian gang-rape victim, at a funeral parlour in Singapore on December 29, 2012 before being fly back to India. The victim, 23, died in Singapore after suffering severe organ failure, the hospital treating her said, in a case that sparked widespread street protests over violence against women. AFP /ROSLAN RAHMAN

NEW DELHI– The body of a gang-rape victim arrived back in New Delhi on Sunday after her death from sickening injuries in a Singapore hospital as India was engulfed by a mass outpouring of grief and anger.

Prime Minister Manmohan Singh was at Indira Gandhi International Airport for the arrival of the specially-chartered plane when it touched down at around 4:15 am (2245 GMT), according to security sources and an AFP journalist at the scene.

A convoy carrying the gold-coloured coffin and the victim’s parents then drove towards the Janakpuri district of Delhi where she had been living while studying for a degree in medicine. The area was sealed off to journalists.

The 23-year-old’s body was repatriated barely three days after she was flown to a Singapore hospital in a desperate final bid to save her life.

Thousands of people took part in late-night candlelit vigils for the medical student who has been the focus of a wave of protests ever since she was savagely attacked by a gang of men on a bus two weeks ago.

As police said the six accused of murdering the unnamed woman could face the death penalty, Singh led appeals for calm to prevent a repeat of the sometimes violent protests that followed the December 16 assault.

Thousands took part in fresh demonstrations on Saturday but they passed off peacefully as mourners vowed the student’s killing would serve as a tipping point for how the nation deals with violence against women.

Doctors who had been treating her at Singapore’s Mount Elizabeth Hospital after she was airlifted there on Thursday were unable to prevent multiple organ failure and she died before dawn on Saturday.

No details of her funeral have been released.

Protesters who gathered in the Jantar Mantar thoroughfare in central Delhi, scene of the largest protest, said the death was a wake-up call for a country in denial about the levels of violence that women face.

The numbers swelled into the evening, with some 5,000 taking part in a candlelit vigil after nightfall despite near freezing temperatures.

Similar protests and vigils were held in other cities including Mumbai, Kolkata and Hyderabad.

Bela Rana, who was among the protesters in Delhi, said women were no longer prepared to suffer in silence.

“We are aware that this is not the first case, nor will it be the last case of gang-rape in India, but it is clear that we will not tolerate sex crimes any more,” said Rana, a Delhi-based lawyer.

Some of the protesters carried placards that read “Hang the Rapist” against the backdrop of a noose.

While six men who had already been arrested have yet to be formally charged, they are now accused of murder.

“It is a non-bailable offence which carries the death sentence,” police spokesman Rajan Bhagat told AFP.

Gang-rapes are a daily occurrence in India and many go unreported by victims who have little faith in an often painfully slow justice system and are deterred by the response they can receive from male police officers.

But the particularly savage nature of the attack in Delhi has brought simmering anger to a boiling point and prompted the government to promise better security for women and harsher sentences for sex crimes.

After being lured onto a bus, the student was attacked by the men who took turns raping her and assaulted her with an iron bar before throwing her and her male companion off the moving vehicle.

“We have already seen the emotions and energies this incident has generated,” said Singh.

“These are perfectly understandable reactions from a young India and an India that genuinely desires change.”

As crowds mourned the student’s death in Singapore, the Press Trust of India reported a new series of sex attacks, including the gang-rape of a 14-year-old girl who then tried to commit suicide by swallowing poison in Gujarat state.

And an 18-year-old rape victim committed suicide in the northern state of Uttar Pradesh after police allegedly failed to take action against the accused.