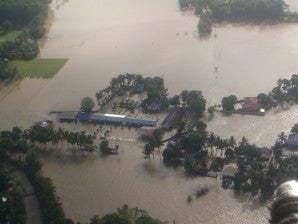 Aerial photo taken shows villages in Iloilo province that were flooded due to heavy rains brought by typhoon “Quinta”. Photo courtesy of the Office of Civil Defense-Western Visayas

The official NDRRMC toll lists 12 people dead, two injured and two others missing in 44 incidents triggered by the storm.

Regional tallies are up to 17. Ramos explained that this may be because the NDRRMC “waits for the body to be recovered before declaring missing persons as dead.”

He said residents who fled to safer ground during Quinta’s onslaught had started returning to their homes.

The NDRRMC said 13,861 families composed of 72,697 individuals were still in 141 evacuation centers.

It said 43,612 families composed of 201,888 individuals in 433 barangays in five regions were affected by the 17th storm to hit the country this year.

Donations from abroad continued to pour in with private groups from Korea and Japan joining the latest batch of international donors.

Social Welfare Secretary Dinky Soliman thanked Dole Korea and Itochu Corp. Japan in partnership with Stanfilco-Dole, a division of Dole Philippines Inc., and Kasilak Development Foundation Inc., a nongovernment organization accredited by the DSWD, for raising P3.2 million worth of relief goods for the typhoon victims.