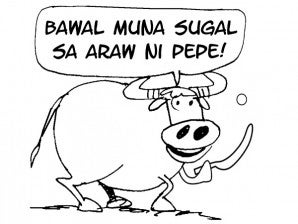 Attention gamblers: Sunday, Rizal Day, is not only a nonworking holiday but also a gambling holiday.

RA 229 was signed on June 9, 1948, by President Elpidio Quirino, the second President of the Third Philippine Republic (post-World War II).

The Presidential Communications Development and Strategic Planning Office (PCDSPO) discovered a copy of the archaic law and uploaded the text to the online Official Gazette (pcdspo.gov.ph). It also posted a link on its Twitter account ahead of Sunday’s Rizal Day rites.

“Yes, it is still in effect. We verified with the National Historical Commission of the Philippines,” Lacierda said in a text message.

And although Sunday is a holiday, penalties still apply.

Cockfighting, horse racing and jai alai aficionados caught betting in these games will be fined P200 or imprisoned for six months or both.

If the offenders are town and chartered city mayors, they will be suspended for six months in addition to the fine.

The law does not explain why it singles out mayors. But neither does it say that higher officials are exempt.

RA 229 also orders the flying of the national flag at half-staff in all public buildings and at half-mast on seagoing vessels on Rizal Day.

So will President Aquino, who leads Sunday’s Rizal Day rites at Luneta Park, raise the flag to just halfway up the pole in front of the Rizal Monument?

That is interesting, because last year, the President, assisted by Cabinet officials, sent the flag all the way to the top. And the flag flew at full-staff anywhere in the country.

The law also mandates the creation of a committee to take charge of the proper celebration of Rizal Day in every municipality and chartered city in the country.

Interviewed by Radyo ng Bayan, Valte explained that the “legal forms” of games of chance are prohibited on Rizal Day.

“Surprisingly, there are a lot of people [who] did not know about that particular law,” she said.

Valte said the PCDSPO had produced an “infographic” of RA 229 to remind the public about the law, “especially now that you have an office which is really concerned about giving people a sense of history and making it very hip and very current.”

Asked whether the Philippine Charity Sweepstakes Office’s lotto games would be drawn Sunday, Valte said the lotto, a legal game of chance, did not exist at the time of the law’s enactment.

And, as in previous years, the government will not collect fares from commuters on the Metro Rail Transit and Light Rail Transit.