The gang-rape on a bus that sickened India 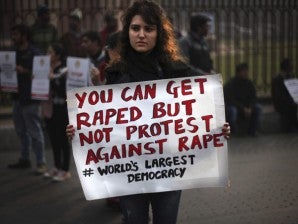 An Indian protester holds a placard during a protest against a gang rape of a young woman in a moving bus in New Delhi, India, Thursday. AP

NEW DELHI—After spending her evening watching “Life of Pi” in a New Delhi mall, the 23-year-old student and her male companion were looking for a quick lift home when a bus with tinted windows pulled over.

The pair were then subjected to a catalogue of violence and sexual depravity which has evoked comparisons with Anthony Burgess’s novel “A Clockwork Orange” and brought simmering anger over the plight of women to the boil across India.

The Indian news channel NDTV greeted news of her death in the early hours of Saturday in a Singapore hospital with the banner headline “RIP: India’s Daughter”, in a reflection of how her plight had moved the nation.

Ever since she was attacked on the night of December 16, the country’s leaders have lined up to offer their prayers and condemn the attack as well as paying for her treatment in Singapore.

Although the identity of the young woman has not yet been released, reports have said she was a medical student who hailed from a rural area of Uttar Pradesh, India’s largest state which borders the capital New Delhi.

Her parents, who had travelled to Singapore after she was flown out by air ambulance on Wednesday night, are said to have sold their small piece of land in order to fund their daughter’s education, often limiting their own meals to little more than rotis with namak (bread with salt), according to NDTV.

“These are simple, rustic people, who have never dreamt of boarding an aircraft, much less travel to a foreign country in an air ambulance,” a source at the hospital told Singapore’s Straits Times after meeting her relatives.

Before flying out to Singapore, the woman had managed to give an interview to police at Delhi’s Safdarjung Hospital about the events on the night of her attack.

Police and prosecutors have outlined how six men picked the pair up outside the mall in a school bus which they had taken for a joyride after drinking heavily.

Even before they stopped outside the mall, they had allegedly picked up another passenger and then forced him to hand over the contents of his wallet.

After getting into an argument with the woman’s male companion, the group are then alleged to have lashed out at the pair before taking turns to rape the woman in the back of the bus while driving around Delhi for some 45 minutes.

They also sexually assaulted the woman with a rusting metal bar, leaving her with severe intestinal injuries, before hurling her out of the vehicle.

The bus would have had to cross numerous police checkpoints at that time of night but at no stage was the vehicle pulled over by officers.

After news of the attack emerged, small-scale protests quickly swelled and were then repeated across the country — fuelled in part by anger at the police’s use of teargas and water cannon.

The Indian government has set up a commission of inquiry to investigate what mistakes were made on the night of the attack and in its aftermath.

But in an address to chief ministers from the country’s states who gathered in New Delhi on Thursday, Prime Minister Manmohan Singh acknowledged that it was far from an isolated event.

“We must reflect on this problem, which occurs in all states and regions. It requires greater attention by the central government and states,” he said.

Gang-rapes happen on such a regular basis that they are rarely reported in the Indian press although the attack in Delhi has led papers to shine a rare spotlight on such attacks.

On Thursday night, it emerged that a 17-year-old girl had committed suicide after police allegedly tried to persuade her to drop a complaint of gang-rape and instead either accept a cash settlement or even marry one of her attackers.

After quoting from the infamous gang-rape scene in Burgess’s novel, a columnist for The Hindu wrote this week that “few Indians will need a dictionary of the teenage slang Burgess invented to grasp the horror of this passage”.

“For progress to be made, we must begin by acknowledging this one fact: the problem isn’t the police, the courts or the government. The problem is us,” wrote Praveen Swami.