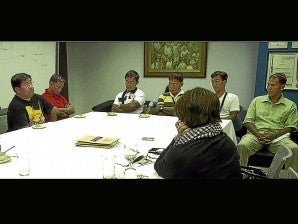 JUSTICE TO THE RESCUE Justice Secretary Leila de Lima (back to corner) meets the Batasan break-in team led by (extreme left) Senior Superintendent Rafael Santiago and his men at the Inquirer editor’s lounge last Tuesday. Their only request for De Lima was to secure them. The other police officers with Santiago are Rudy Gahar, Alan Layugan, Rodel Tabangin, Trifon Laxamana and Norman Duco. ARNOLD ALMACEN

Third of a series

Employees of the Commission on Elections (Comelec) were among the civilians involved in the manufacture and switching of fake election returns (ERs) at the Batasang Pambansa complex in January-February 2005, according to whistle-blower Senior Superintendent Rafael Santiago.

Six years after the fact, Santiago said this information was relayed to him by Ruel “El” Bello, a son of former election supervisor Roque Bello.

Both father and son were implicated by Santiago and his men in the ER-switching operation. But the elder Bello has denied involvement and said he and his son were “ready to face any investigation.”

The Bellos have “a reputation as election operators,” Justice Secretary Leila de Lima said in a press conference on Wednesday.

“In one of my conversations with El, he mentioned that some of those involved in his operation are Comelec employees,” Santiago told the Inquirer.

When asked if he knew the names of the persons in question, he replied in the negative. “They were not introduced to us, and even if they were, I doubt that they would be using real names. They knew what they were doing was illegal,” he said.

The Inquirer was able to gather the names of those allegedly “employed” by Roque and El Bello in their operations nationwide from a source who claimed to be also an election operator, and who asked not to be identified for security reasons.

The source estimated the cost of the Batasang Pambansa operation, which involved at least 6,000 election returns, as “monumental.”

“The operation was big and risky,” the source said. “The money involved could not be less than P100 million.”

Costs vary depending on the requirement of the client, according to the source. “In the Batasang Pambansa operation, the cost can be easily placed at P2,000 or P3,000 per ER  because of the volume of the requirement,” the source said.

And each “employee” has his own expertise, the source said, adding: “These people are known in the circuit, and election lawyers also know them to be mostly employed by the Bellos.”

The source provided 14 names, of which three were purported Comelec employees and one was the younger Bello’s “right-hand man.”

“[One of the Comelec employees] provides the paraphernalia, like padlocks, ER forms and indelible ink, depending on the need of the operator,” the source said.

The only task of two of those named is to purchase and take custody of blank election returns, the source said. “Sellers deal only with these two. Otherwise, no transaction and no ER.”

The others named are experts in ensuring that “revisions” in the ERs tally with the primary evidence, the ballot, the source said.

Pilfered ERs and other documents are shredded or burned to wipe out the paper trail, the source said.

The source likewise said El Bello’s purported contact in the Comelec also provided him the data on the election return that would be manufactured.

“It was not only the election returns. The markings on a ballot box indicating the area where it came from should also be corrected to avoid suspicion of it being tampered when it is opened in case of a recount,” the source added.

In his recollection, Santiago said the 10 civilians who were part of the operation were precise in their job.

“They were fast, and they knew what ballot box to look for and open, and its contents replaced with the manufactured ERs,” he said. “They were quiet, probably knowing that what they were doing was illegal.”

Santiago said that in his conversations with the Special Action Force (SAF) team that entered the Batasang Pambansa’s South Wing and served as escorts of five of the civilians, he learned that the latter were also experts at “picking locks.”

“They worked with only the light of a small flashlight they carried and lock picks,” he said.

Santiago quoted Inspector Ramon Garcia, one of the SAF men who entered the complex, as saying that the civilians were “very familiar with the position of the ballot boxes.”

“They immediately proceeded to the area where the Mindanao ballot boxes were stored,” he quoted Garcia as saying. “They knew what to look for.”

Santiago added that in 2008, he and his men contemplated coming out with what they knew.

But they ultimately decided against doing so because of fear that they would just be treated as another “trouble for the government,” he said.