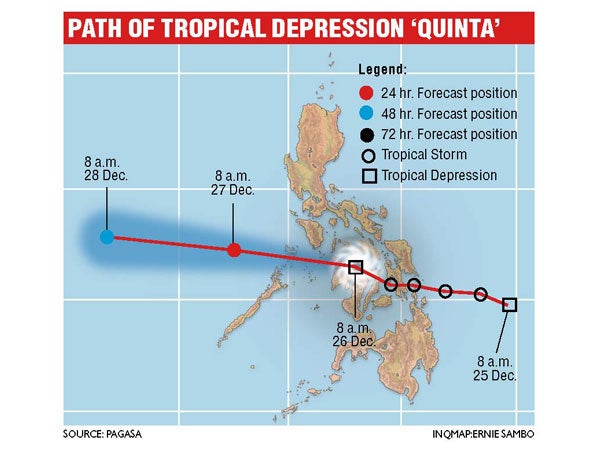 Tropical storm “Quinta” cut across the Visayas on Wednesday, triggering scattered floods and landslides, but mercifully losing steam before it could wreak havoc on the country still recovering from a lethal typhoon that struck three weeks ago.

Several hundred people fled to evacuation centers in Leyte as the last storm of the year smacked the coastal town of Abuyog at midnight Tuesday with peak winds of 65 kilometers per hour before weakening into a tropical depression as it blew inland.

In its 4 p.m. bulletin, the Philippine Atmospheric, Geophysical and Astronomical Services Administration (Pagasa) located the eye of the storm—international name: “Wukong”—at 90 km east of Coron in Palawan.

The 17th cyclone of the season was expected to be out into the West Philippine Sea Thursday evening, moving westward at 24 kph with center winds of 55 kph.

“So far, the Pacific looks clear, and that is where storms usually form, so we believe Quinta may be the last storm for this year,” said Pagasa forecaster Bernie de Leon.

However, close to 6,000 people were marooned in various seaports in Visayas, Mindanao and Bicol region after the Coast Guard prohibited ships and other small sea vessels from sailing.

“We are hoping that there will be no casualties since it has already weakened into a tropical depression,” Ramos told the Inquirer.

“I think it helped that residents in the areas affected by Quinta were used to being visited by typhoons unlike those living in the Davao region,” he added, referring to the area battered by Typhoon “Pablo” on Dec. 4.

Over 1,000 people were killed and 800 others missing and feared dead when Pablo ravaged coastal and mining towns in Compostela Valley and Davao Oriental. Most of those missing were fishermen who sailed out to sea despite Coast Guard warnings.

“We are thankful that it won’t be hitting us anymore,” said Fe Menorias, 41, one of about 100 victims of Pablo sheltering at the Rotary Park vollydrone in Tagum City, Davao del Norte.

Besides a landslide in Sogod, Southern Leyte, and flooding in other areas, Ramos said the NDRRMC did not monitor any major incidents triggered by Quinta.

He said Leyte and Samar were the hardest-hit areas as heavy rain caused floods in residential areas and main thoroughfares from Buray, Western Samar, to Taft, Eastern Samar.

“The Maharlika Highway in Barangay Kahupian in Sogod, Southern Leyte, has been closed to traffic because of a landslide. That main highway connects Luzon, Visayas and Mindanao,” Ramos said.

As of 3 p.m., the NDRRMC said 80 families composed of 265 individuals were taken to evacuation centers in Dapa town on Siargao Island, Surigao del Norte.

The NDRRMC council said local government units also ordered preemptive evacuation in Loreto, Dinagat Islands, in the towns of Guiuan, Salcedo, Mercedes and Balaginga in Eastern Samar, and in Sogod and Tacloban City in Leyte.

The NDRRMC said 5,809 passengers were stranded, while 184 rolling cargoes and 84 vehicles were forced to stay in 20 seaports.

The council said a small fishing boat capsized off Barangay (village) Corregidor in Dapa town but the five people aboard were rescued.

Airport authorities said 41 flights to and from Manila were canceled.

Landslide cut off a portion of Maharlika Highway in Barangay Kahupian in Sogod, Southern Leyte.

In Cebu, there was minimal damage to crops and infrastructure but power outages were experienced in the northern towns of Catmon going to Asturias, Balamban, Daanbantayan and Bogo City.

Air and sea transport operations were suspended Wednesday in Masbate, Sorsogon and Albay as a precaution, grounding hundreds of passengers.

In Albay, Gov. Joey Salceda directed the Coast Guard to prohibit small sea crafts and fishing boats from sailing, while village chiefs were advised to monitor and prepare for possible storm surges.

Read Next
‘Quinta’ weakens into depression; no casualties reported from affected areas
EDITORS' PICK
Smart offers wireless fiber-like speeds to Filipino homes with country’s first 5G Prepaid Home WiFi
Pharmally’s Twinkle Dargani in tears when asked about missing documents
Corruption in PH: Where presidential aspirants stand
Two more sites at Robinsons Malls for temporary offsite passport services
BIR audits tax compliance of Pharmally
Holidays made best with Acer’s ‘Holidays at Home’ raffle promo
MOST READ
Roque ‘hurt’ after presidential aspirant did not adopt him in Senate lineup
Gordon: ‘How dare you ask for Filipinos’ vote when you failed them?’
Pharmally’s Twinkle Dargani in tears when asked about missing documents
WHO chief scientist say Omicron is very transmissible
Don't miss out on the latest news and information.