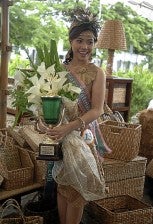 People sometimes don’t know what to do with what they have, said Daphne Cortez, 19, in her opening remarks as a beauty pageant contestant on Friday.

“Today, with our knowledge of water lilies, we’ve managed to turn it into something beautiful, like my dress,” she said, showing off a body-hugging cocktail dress made from dried leaves of the endemic plant that grow abundantly at the Las Piñas and Zapote Rivers.

Minutes later, she was crowned Miss Las Piñas Water Lily, the second winner in the tilt which started last year.

The pageant was only one of the highlights during the 6th Water Lily Festival yesterday, with former Rep. Cynthia Villar stressing how misfortune can turn into something profitable for both the residents—the project’s direct beneficiaries—and the local economy.

“This problem is no longer confined within this city. It’s all over the country now,” she told Inquirer, citing the Rio Grande de Mindanao problem with water lilies last month.

Water lilies, or water hyacinths, had clogged the river and marshes along the stream and water spilled onto the streets, which triggered massive floods.

The family’s Villar Foundation sent two trainers to brief locals there on how to turn the plants, regarded as pests, into pesos, said Villar.

The slippers would later be distributed among them as part of the foundation’s calamity assistance program and “so they can feel the fruits of their labor, and probably inspire them to work on water lily products.”

Instead of transporting the byproducts of the plant to Manila, it would be better for the residents to find a market for their wares in the area. That way, the people could sell their handicraft cheaper since they don’t need to recoup much of the transportation cost, she explained.

In Las Piñas’ case, 50 families who work as staff for the livelihood project earn at their own pace. Villar said the earnings of each of the weavers depend on how many products they finish.

Some weavers get are sent overseas for training and the skills they acquire are shown in the quality of their work, Villar said.

To take the products made by Las Pinas weavers to the next level, more sophisticated equipment like high-tech dryers and dyeing machines are needed to compete with other water lily handicraft producers that fetch premium prices, she added.

Upgrading, however, has a downside to it.

“We might not be able to sell the items here because any heavy investment should be recouped and it will affect the price of the wares,” she said. “Our goal now is to make the handicrafts affordable to our countrymen.”

For instance, in Japan, a bag made of water lily could fetch a price starting from P7,000, Villar said, pointing to a bag sample displayed in one of the booths.

For now, the foundation is set to launch another potential cottage industry in the making: Citronella planting.

Villar said the planting of citronella along the Las Piñas and Zapote riverbanks was intended to ward off dengue-carrying mosquitoes, a perennial headache for local government units, especially during the rainy season.

The plants alone could drive away the insects, she explained, adding the project was in coordination with botanists from the University of the Philippines Los Baños.