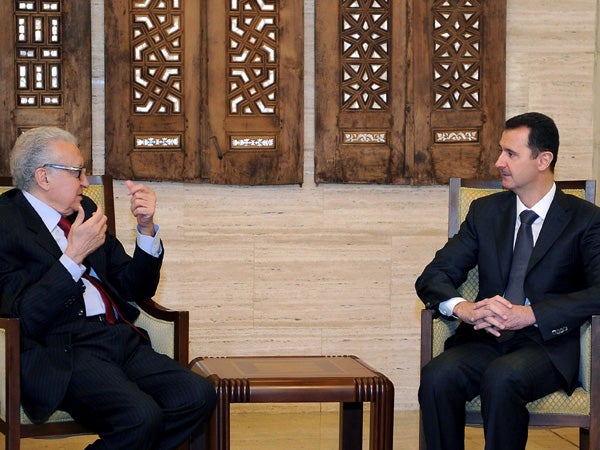 In this photo released by the Syrian official news agency SANA, Syrian President Bashar al-Assad, right, meets with UN Arab League deputy to Syria, Lakhdar Brahimi in Damascus, Syria, Monday, Dec. 24, 2012. The international envoy tasked with pushing to end Syria’s civil war said the situation is still “worrying” after discussing the crisis with President Bashar Assad on Monday. The remarks gave no indication of progress toward a negotiated solution to the conflict. AP/SANA

BEIRUT — The international envoy to Syria said after talks with the country’s leader Monday that the situation was “worrying” and gave no indication of progress toward a negotiated solution for the civil war.

Lakhdar Brahimi’s mission came as activists reported intense fighting in the central province of Hama, where anti-government gunmen entered the predominantly Alawite town of Maan. Assad’s regime is dominated by members of his minority Alawite sect, an off-shoot of Shiite Islam, while most of the rebels are Sunni Muslims.

Brahimi said he and President Bashar Assad exchanged views on the crisis and discussed possible steps forward, which he did not disclose. He spoke briefly to reporters after meeting the Syrian leader at the presidential palace in Damascus.

“The situation in Syria is still worrying and we hope that all the parties will go toward the solution that the Syrian people are hoping for and look forward to,” Brahimi said.

Syria’s state news agency quoted Assad as saying his government supports “any effort in the interest of the Syrian people which preserves the homeland’s sovereignty and independence.”

Brahimi has apparently made little progress toward brokering an end to the conflict since starting his job in September, primarily because both sides adamantly refuse to talk to each other.

The government describes the rebels as foreign-backed terrorists set on destroying the country. The opposition says that forces under Assad’s command have killed too many people for him to be part of any solution.

Activists say more than 40,000 people have been killed since the Syrian uprising began in March 2011.

Brahimi’s two-day visit was to end later Monday. It is his third to Damascus as an envoy of the United Nations and the Arab League.

The security situation in Damascus and elsewhere in the country has declined since Brahimi’s previous visits. Instead of flying in to the Damascus International Airport as he did on earlier visits, Brahimi drove to Damascus over land from the Lebanese capital Beirut because of fighting near the Damascus airport.

The Britain-based Syrian Observatory for Human Rights quoted activists in the central city of Homs as saying that six rebels died in two neighborhoods Sunday night after inhaling white smoke that came out of shells fired on the area.

“We demand that an international team be sent to the area to investigate the type” of the shells used, said Observatory chief Rami Abdul-Rahman.

Amateur videos released by activists showed men in hospital beds suffering breathing problems as doctors placed oxygen masks on their faces. Some of them coughed strongly as they tried to breath.

“At first, the smell was strong. Then little by little, it got weaker,” a man who was identified as a rebel in the area said in the video. “The smell was like hydrochloric acid, and people started choking and I wasn’t able to breath.” He added.

“My eyes hurt and burned, my head started hurting, I wasn’t able to breathe. I just want to breathe clean air,” said the man who closed his eyes and said he was having difficulty seeing because of the attack.

The videos appeared genuine and corresponded to other AP reporting on the events depicted.

The Observatory said the rebels included members of Jabhat al-Nusra, which has been branded a terrorist organization by the U.S. and is affiliated with al-Qaida.

The Observatory and Alhamadee said the rebels shot down a Syrian government MiG warplane that was attacking rebel positions in and around Maan. The Observatory said at least 20 soldiers and 11 rebels were killed in Monday’s fighting.

The Observatory also said Syrian army helicopters bombed the town of Talbiseh in central Homs province, killing at least 14 people, five of them under age 18. The Local Coordination Committees said the attacks targeted a makeshift hospital and a bakery.

Reports by anti-regime activists about a government airstrike Sunday in the rebel-held central town of Halfaya that killed scores of people also cast pall over Brahimi’s visit.

Some activists said the strike had targeted a bakery. Amateur videos posted online showed the bodies of many dead and wounded scattered in a street. The videos appeared to be genuine and corresponded with other AP reporting.

The Observatory said it had collected the names of 40 men and three women killed in Halfaya. The group also reported seeing photos of the dead bodies of 15 more unknown men.

On Sunday, it reported 60 dead.

Abdul-Rahman, the group’s head, said he could not confirm that the attack was an airstrike or that it had targeted a bakery.

Syria’s state news service blamed the attack on “an armed terrorist group” — its shorthand for the rebels — accusing them of filming the aftermath to “frame the Syrian army.”

In the videos, armed rebels are clearly among those tending to the dead and wounded.

In a statement, a U.S. State Department spokesman condemned “the latest vicious attacks by the Syrian regime against civilians” and expressed support for Brahimi’s work.

“We urge the regime to capitalize on the Joint Special Representative’s efforts in order to transition to a new government and end the brutal repression of the Syrian people,” the spokesman, Patrick Ventrell, said.