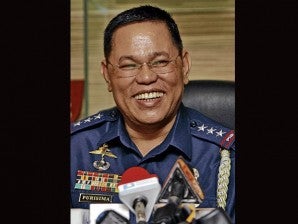 The Philippine National Police (PNP) on Monday warned the public against buying and using illegal firecrackers.

Speaking at a news briefing at Camp Crame later, Purisima said local police forces throughout the country had been tasked to help the Department of Health (DOH) educate the public about the dangers of using firecrackers.

He said the police would be “very strict” in enforcing firecracker laws and related regulations.

“[T]he DOH will [handle the] information drive [and] we in the PNP will focus on the enforcement of laws that will help in reducing [firecracker-related injuries] to the lowest level,” Purisima said.

He called on business owners and firecracker manufacturers to think about the safety of their customers and comply with the standards set by the PNP Firearms and Explosives Office and other governmental agencies.

“For those planning to use firecrackers, I ask them to buy only from reputable and licensed stores so that they [can] be [sure] that the firecrackers and pyrotechnic devices they will [use] are safe and [have] passed safety standards,” Purisima said.

He said police commanders who failed to stop the trading and manufacturing of prohibited firecrackers would face sanctions and would be “answerable to me.”

But policemen, he said, cannot arbitrarily confiscate illegal firecrackers and arrest vendors without orders from their superiors.

As for policemen who would be caught firing their service firearms unnecessarily, Purisima had this to say: “I warn all our personnel to refrain from using their firearms in greeting the onset of the New Year. Otherwise, you will certainly end up regretting … for your entire life [defying] my order.”

“There are safer means to greet the new year and our policemen should be the role model in the government’s [campaign] against the use of dangerous pyrotechnic materials,” he said.

While the police did not receive any serious security threats, Purisima placed the entire 148,000-strong PNP on heigthened alert for the entire holiday season.

“We do not want to be complacent … We will maintain a high level of vigilance until the people have gone back to their work and schools,” he said.