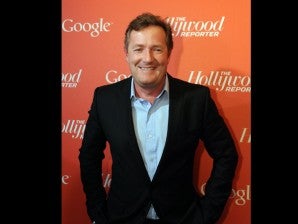 CNN’s Piers Morgan arrives at a red carpet event hosted by Google and the Hollywood Reporter on the eve of the annual White House Correspondents’ Association dinner in Washington in this April 27, 2012 file photo. AFP

The outspoken former British tabloid editor has launched something of a personal crusade for greater gun control measures in the wake of the December 14 massacre at Sandy Hook elementary in Newtown, Connecticut.

On Tuesday, Morgan held an especially contentious interview with executive director of Gun Owners of America Larry Pratt, appearing to become incensed and incredulous when Pratt suggested more, not fewer, weapons as the solution.

“You’re an unbelievably stupid man, aren’t you?” Morgan said at one point during the heated debate. “You have absolutely no coherent argument. You don’t actually give a damn about the gun murder rate in America.”

Following the interview, a Texas journalist posted a petition on the White House website alleging Morgan “is engaged in a hostile attack against the US Constitution by targeting the Second Amendment.”

“We demand that Mr. Morgan be deported immediately for his effort to undermine the Bill of Rights and for exploiting his position as a national network television host to stage attacks against the rights of American citizens,” it says.

Many Americans believe in the literal interpretation of the Second Amendment, which enshrines the “right to bear arms” in the US constitution.

Morgan insists America can outlaw military-style assault weapons and high-capacity magazines without infringing on people’s constitutional rights and says he has no quarrel with the Second Amendment.

Two days after the petition calling for Morgan’s deportation was posted, it had already garnered more than 19,000 signatures, closing in quickly on the 25,000 required to get a response from the White House.

A defiant Morgan refused to back down from his position.

“Ironic U.S. gun rights campaign to deport me for ‘attacking 2nd Amendment rights’ – is my opinion not protected under 1st Amendment rights?,” he posted on his Twitter feed Saturday, referring to freedom of speech provisions.

Morgan continued to post incendiary comments on the gun control debate, including a response on Sunday morning to an NBC interview with a top official in the powerful pro-gun lobby group, the National Rifle Association.

“Watching @davidgregory expose Wayne Lapierre for what he is – a dangerous, dim-witted, deluded menace to American safety. @NRA,” Morgan tweeted.

At least some Americans have come out in support of British citizen.

In one message, reposted by Morgan, Lee Cox in Arizona wrote: “I’m a native-born US citizen, and I agree 100% with Mr. Morgan. If he goes back to the UK, should I go with him?”

America has suffered an epidemic of gun violence over the last three decades including 62 mass shooting incidents since 1982. The vast majority of weapons used have been semi-automatic weapons obtained legally by the killers.