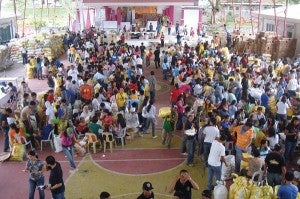 CARAGA, Davao Oriental—Still grappling with shock and horror over the devastation wrought by Typhoon “Pablo,” people here greet Christmas with deep feeling of grief, forgoing parties and ostentatious celebrations to sympathize with those who lost their loved ones.

As overcast skies look down the town with threats of a storm and talk of the Mayan prophecy of the end of the world, people from nearby Cateel and Baganga towns take the few boats crossing the raging Manurigao River in Barangay (village) Baugo, where the bridge that used to connect Baganga with Caraga town had collapsed.

“It’s better to flee to the city (of Mati), where the children are safe,” Michael Tesiorna said, holding a 6-year-old child, while his wife was pacifying a crying baby.

He said he had to take his family to Mati because he feared news reports of another storm. He still remembered how Pablo blew the roof off his house when it hit Caraga on Dec. 4 and he and his boy were left shivering in the rain for hours.

“I had to bite him in the arms because he was already numb with the cold,” he said on a bus bound for Mati City. “I was afraid he might get sick, I had to bite myself, too, so that I would remain awake.”

Along the road from Mati, a 104-kilometer ride away to this old sleepy town where Spain built Mindanao’s first church in 1884, the once ubiquitous Christmas lanterns that used to adorn houses this time of the year were nowhere to be seen.

“Who would want to celebrate Christmas when everybody lost everything?” asked Gemma Mamilic, 24.

“What’s important now is to survive,” Mamilic said. She said she and her children, including a year-old child, had fled to a school building, but its roof was blown away, leaving them in the rain for hours while she struggled to shield her family  from flying debris with pillows.

She recalled that this time last year, family and friends were preparing food for the holidays.

Fr. Uldarico Toroba Jr., Caraga parish priest, said Christmas may not be as merry these days, but people continued to keep alive the spirit of Christmas by reaching out to those in need.

Toroba said Pablo may be sending a message. “It is telling us that people in this world should take care of the environment, and to serve other people with sincerity,” he said.

“It’s telling us, that we are only stewards of this earth, that we don’t own Mother Nature,” he said. “But then, again, it’s also telling us that these things will also pass, and that we should make our own spiritual preparations, to sincerely serve others.”

Toroba said contributing money intended for Christmas parties to relief for the victims was keeping the spirit of Christmas alive.

“Reaching out to them is the real essence of Christmas, and in that way, the spirit of Christmas is still alive in Caraga,” he said.