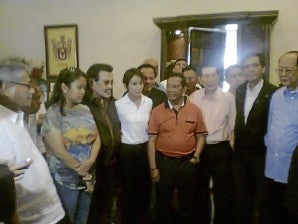 CEBU CITY—Suspended Gov. Gwendolyn Garcia has found an ally in the stalwarts of the United Nationalist Alliance (UNA) in her fight to defy a suspension order from Malacañang.

Vice President Jejomar Binay, Senate President Juan Ponce Enrile, former President Joseph Estrada and former Sen. Ernesto Maceda arrived at the Capitol past 11 a.m. on Sunday to show their support to Garcia who had been holed up in her office since Wednesday when her suspension order was released.

They attended Mass at the Capitol and had lunch together. Maceda left after lunch while Binay, Enrile and Estrada stayed until past 2 p.m.

“I am deeply touched. I am speaking for the Cebuanos … This will be forever remembered by the Cebuanos, a truly, truly welcomed gesture,” she said.

The Office of the Ombudsman issued a six-month suspension on Garcia for grave abuse of authority for usurping the powers of then Vice Gov. Gregorio Sanchez in 2010.

She filed a petition for review with a prayer for a temporary restraining order (TRO) in the Court of Appeals (CA) to stop the Department of the Interior and Local Government (DILG) from implementing the order.

Binay said Garcia’s plight reminded him of his experience in 2006 when, as mayor of Makati City, he defied the six-month preventive suspension order issued by the Office of Ombudsman in connection with an administrative complaint for allegedly keeping “ghost employees” on the city government payroll.

Binay stayed at his office, surrounded by hundreds of his supporters until he was able to secure a TRO from the CA.

“At least in that particular case, I didn’t follow the [Ombudsman] order. I didn’t leave [my office] because I insisted that there was a pending case in court and we shouldn’t be removed,” Binay said.

He said he was saddened by what he read in newspapers about what happened to Garcia, particularly on reports that her supporters were not allowed to enter the Capitol compound.

Asked if he would talk to President Benigno Aquino III about this, he replied in jest: “secret.”

Binay said he talked to the ground commander of the policemen at the Capitol and asked him to allow people to get inside.

At least 500 people, mostly from Liloan town where its chief executive, Duke Frasco, is Garcia’s son-in-law, were allowed to gather outside the front entrance to the governor’s office.

But security remained tight. The police would log and require an identification card to anyone who wished to get inside the compound.

Enrile said that as leaders, they have to show their support to their embattled member.

“If we cannot support our members when they’re faced with oppressive conduct, then we might as well fall that soon,” he added.

Garcia was initially included in UNA’s senatorial lineup. But she later backed out and opted to run for third-district representative due to the request of the mayors and her poor showing in the surveys.

In Manila, Malacañang Sunday aired the hope that Estrada, Binay and Enrile did not encourage suspended Garcia to dig in more, but instead convinced her to respect the rule of law.

Budget Secretary Florencio Abad said it was prudent for all government officials to “adhere strictly to the rule of law” given the already tense situation in the Cebu provincial government arising from Garcia’s defiance of a six-month suspension order.

“I hope not,” he said in a text message when asked if Garcia’s suspension would lead to a showdown between the administration Liberal Party (LP) and UNA. “There is a judicial process that is in play now after Garcia petitioned for TRO with the CA.”

Meantime, all parties, especially government officials, “must adhere strictly to the rule of law so as not to aggravate the already tense situation,” added the most senior political adviser to President Aquino.

Estrada, Binay and Enrile— the three top leaders of UNA—took some by surprise when they flew to Garcia’s succor on Sunday morning as she questioned the suspension order enforced by Interior Secretary Manuel Roxas II, Binay’s political nemesis.

“Senate President Juan Ponce Enrile and Binay are responsible public officials who should be the first to uphold the rule of law. That may be an appeal they can present to Governor Garcia to ease the tension there,” Abad said.

“I am certain that the last thing they would want to do is encourage or tolerate mob rule,” he added.

“We certainly encourage Governor Garcia to follow the rule of law. We’ve been monitoring the situation in Cebu and, based on what we have heard, the suspension has popular support among the people of Cebu based on the local survey. And, as a governor, we certainly would encourage Governor Garcia to follow the process,” he said.

Meantime, acting Gov. Agnes Magpale has taken the “necessary steps” to ensure that governing Cebu would not be hampered by the standoff, Lacierda said.

Lacierda deferred to the DILG on how to handle the situation should Garcia continue to hole up in her office.