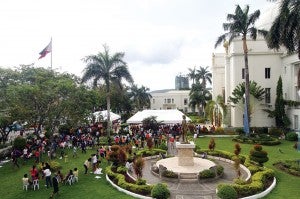 SUPPORTERS of Cebu Gov. Gwen Garcia troop to the capitol after she was suspended by the Department of the Interior and Local Government. TONEE DESPOJO/CEBU DAILY NEWS

Suspended Cebu Gov. Gwendolyn Garcia has asked the Court of Appeals (CA) in Manila to stop the Department of the Interior and Local Government (DILG) from implementing its order to suspend her from office for six months.

Garcia filed last Thursday a petition for review with prayer for a temporary restraining order on the DILG directive ordering the Cebu governor’s suspension.

Garcia filed her petition at a time when the judiciary was preparing for the Christmas holidays next week.

Garcia was ordered suspended based on the complaint filed by the late Vice Gov. Greg Sanchez in 2010, accusing her of usurpation of authority.

Garcia vowed to defy the suspension order and said she would leave her office in Cebu City only if the police would forcibly take her out of there.

In Cebu City, Garcia declined to provide details of their petition. Her brother, Rep. Pablo John Garcia of Cebu’s second district, explained that they didn’t want to telegraph their punches.

The governor has been holed up at the capitol since Wednesday when the DILG enforced the suspension order and installed Agnes Magpale as acting governor.

She was accompanied by members of her family inside her office and had been visited by her supporters.

But she may have just lost her department heads.

A day after pledging their loyalty to Garcia, the capitol department heads met with Magpale in her conference room yesterday and recognized her authority as acting governor.

Provincial Treasurer Roy Salubre explained that they agreed to meet with Magpale after he received a memorandum from the Department of Finance.

In the memorandum, Salvador Del Castillo, OIC-executive director of the Department of Finance, Bureau of Local Government Finance, advised Salubre to follow all lawful orders by “duly constituted authority” to avoid “civil and administrative liability in the discharge of your official function.”

Salubre said she apologized both to Magpale and Garcia. “Sorry kang Ma’am Gwen, we are just following orders,” he said.

Magpale said she hugged each department head during the meeting, saying she understood their situation.

“It is not my character to hold a grudge,” Magpale said.

“In the spirit of Christmas, I pledge to you that there’s no more rancor in my hearts. I prayed over this, and I think my prayers triumph,” she said.

Magpale said she asked their support because she wanted to assess the financial status of the provincial government for the sake of transparency and accountability.

Most of the department heads joined Magpale in the Mass at the Legislative Building attended by capitol employees shortly before 11 a.m.

After the Mass, she told the employees that the department heads had acknowledged the legitimacy of her assumption as acting governor.

She then asked Salubre and provincial budget officer Emmie Gingoyon to stand beside and announce the much-awaited Christmas bonus to the employees.

“We will give at least P30,000, or 14th month [pay], whichever is higher,” Salubre announced. The announcement was greeted with cheers.

The provincial board held a special session and passed a P50-million budget for the bonus of capitol employees.

Magpale said the bonus will benefit more than 1,000 capitol employees and officials, even the suspended governor.

She also announced that the employees would receive a sack of rice each. Barangay health workers would also get P2,500 each and P1,500 each for barangay watchmen.

Another Mass was held at the governor’s office, attending by Garcia, her family members and some barangay health workers.

Magpale said they would exercise “super maximum tolerance” on the Garcias, who had been staying at the governor’s office. With a report from Carmel Loise Matus, Inquirer Visayas