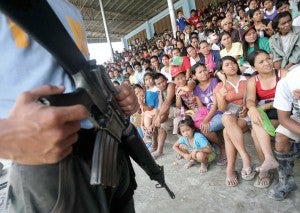 FAMILIES crowd over a sports stadium in Barangay Andap in Compostela Valley to wait for relief goods after Typhoon “Pablo” swept through the area. MARIANNE BERMUDEZ

DAVAO CITY—The education cluster of the Typhoon “Pablo” humanitarian operation has seen a flicker of hope for some normalcy in typhoon-devastated areas with the holding of learning sessions among schoolchildren there.

This came after three 84-square-meter tents, which are the equivalent of two classrooms, were set up at Cabinuangan Central Elementary School in New Bataan, Compostela Valley.

“There is a need for schools to operate because we believe that the school is the last bastion of hope to create an outlook of recovery from the devastation. If we don’t do that, then the future in these areas will be bleak,” Jenielito Atillo, public information officer of the Department of Education (DepEd) in Southern Mindanao said yesterday in a press conference.

Atillo said while there are almost 1,800 students in Cabinuangan alone and the initial tents could not possibly accommodate all of them, more similar structures would be put up in the next few days.

Forty more such tents were to arrive, he said.

Tents for learning were also being put up in Davao Oriental, another Pablo devastated area in the region, Atillo said.

The learning sessions are informal schemes of delivering education and not the usual system that follow the basic education curriculum, he said.

He said the DepEd might divide the classes into shifts, according to ages or depending on what cluster members would agree upon.

“We will ensure the full utilization of the tents because some classrooms of Cabinuangan School cannot be utilized,” he said.

Education authorities had reported that almost 900 public school classrooms were washed out and about 350 others had been damaged, mostly in Compostela Valley and Davao Oriental.

Baganga town in Davao Oriental had 132 public schools destroyed by the typhoon and the flood that it spawned.

Atillo disclosed that part of the DepEd’s efforts to bring back students into their classes is to provide them with school materials. A feeding program for the children has also been started, he said.

When asked if parents were ready to send their children back to school, Atillo said, “We understand that the primordial concern of the parents [at this time] is food, water and shelter.”

He said they were appealing to parents to allow their children go to school instead of going with them every day in looking for needed provisions.

Atillo said the education cluster is also looking at the possibility of holding separate sessions for parents to help them recover emotionally and psychologically from their traumatic experience.

“That would be healthy for both the parents and the kids,” he stressed.

Atillo said many teacher-victims opted not to go to evacuation centers to give way to other victims.

“But they also need help so our director started a donation campaign for the teachers needing assistance,” he said.