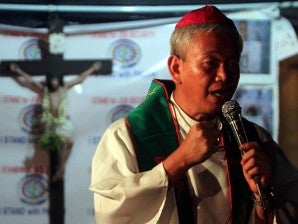 Setting aside differences with Malacañang, the Catholic Bishops’ Conference of the Philippines (CBCP) on Thursday pleaded with President Aquino to meet with 56 farmers on a hunger strike to dramatize demands for the swift  implementation of agrarian reform commitments he made to them six months ago.

“We are deeply concerned about the situation,” said Manila Auxiliary Bishop Broderick Pabillo, head of the CBCP’s National Secretariat for Social Action.

“By the end of the third day, Dec. 19, a total of 28 hunger strikers were supposed to have collapsed and were rushed to the hospital. The number increased to 33 at the start of the fourth day,” Pabillo said in a statement issued as bishops were still smarting from a setback dealt with the approval in Congress of the contentious reproductive health bill opposed by the Catholic Church hierarchy.

“We therefore appeal to the President to listen to their request and grant them an audience as soon as possible, before the number of hunger strikers collapsing increases.”

Malacañang on Thursday ruled out a new meeting between Mr. Aquino and the farmers.

“The President has already spoken to them and made commitments on certain issues raised in his last dialogue with them. What needs to be done is to implement the directives. So it’s not necessary for the President to meet with them,” Budget Secretary Florencio Abad said in a text message.

However, Abad said he and Social Welfare Secretary Corazon Soliman would meet with the farmers either Friday or Saturday to “find out what the bottlenecks or issues are that hinder compliance with the commitments.”

Representatives of the farmers were originally scheduled to meet with Abad and Soliman at 5 p.m. yThursday, according to Agrarian Reform Secretary Virgilio de los Reyes, but it was called off because the President summoned them to an urgent Cabinet meeting around that time.

The 56 farmers under the auspices of the advocacy group Task Force Mapalad (TFM)  began an indefinite fast on Monday, taking only water, at the Department of Agrarian Reform (DAR) building to press demands that De los Reyes be fired purportedly for failing to carry out the President’s promises under the Comprehensive Agrarian Reform Program (CARP).

‘They want my head’

In a wide-ranging interview in the Inquirer office Thursday, De los Reyes shrugged off charges of incompetence.

“If the President says it’s time for me to go,  I’m prepared to go,” the DAR chief said.

“I did not want this job, but I think it’s my duty to do it,” said the former vice dean of De La Salle University’s College of Law.

“If the President tells me ‘you’re ineffective,’ I won’t ask for another position. I just want to go back to my former life,’’ he said, calling the charges against him  “unfair.”

“They want to get my head on Caesar’s, Pilate’s or Herod’s platter.”

Pabillo said the farmers returned to Manila six months after their audience with the President in June “hoping to report to him the slow progress and dismal performance in land distribution targets, especially in Negros.”

“We are in solidarity with the farmers in calling the President to fulfill his promise to complete CARP and remove all obstacles that delay and hinder its implementation,” he said.

“We also urge all the faithful to pray for the hunger strikers and farmers in struggle, and for the President to take responsibility for the completion of the CARP.”

The farmers  are urging that the President take over the job of De los Reyes.

They accused the DAR secretary of “failing to live up to the expectations” of the President to work double-time to speed up the land acquisition and distribution component of CARP, issue notices of coverage for private agricultural lands 25 hectares and bigger and hasten the release of certificates of landownership awards for landless farmers.

In June, the farmers numbering around 300 from Negros Occidental, Davao and Bukidnon marched for 10 days and were received at the Palace by the President, who told them that CARP would be fully implemented before its expiration in 18 months.

They said the President promised that notices of coverage for landholdings 25 ha and above, and 10 ha and above would be issued by the end of this year and landholdings under 10 ha, not later than July 2013.

De los Reyes admitted that private agricultural landholdings in Negros Occidental were the most contentious, but said the DAR was on track.

“It is unfair to look at the low accomplishment by comparing it with what was done before, because what is left is contentious and needs verification of land titles,” De los Reyes said. “Yes, we’re slow compared with 1992 to 1998 when what was distributed was government-owned land, collective titled.”

“One thing is clear: All the lands that the TFM are following up are already moving, faster than what they’ve had in previous administrations, particularly in Negros,” he said.

De los Reyes, however, said he couldn’t give a definite answer when the DAR could distribute lands covered by TFM’s demands “because the number of landholdings keeps increasing every month.”

De los Reyes, however, admitted that land distribution had been hobbled by the fact that three agencies—Department of Environment and Natural Resources, Land Registration Authority (LRA) and National Commission on Indigenous Peoples—were conducting land surveys.

“Many times we find that we can’t find the titles at all,” he said. He proposed that one agency  be created to handle the distribution of private and public lands.

Worse, the LRA could digitize only current titles, which doesn’t help in the DAR’s job to trace old titles and distribute lands, and the process of digitization would not recognize titles carrying erroneous technical descriptions, unlike in the past, he said.

“If  you could  distribute lands with erroneous technical descriptions before, you can’t do that with LRA,” he said, referring to lands that are not properly delineated.

Dorita will get her land

And of course, there’s an “imbalance” of DAR personnel handling the coverage of hundreds of thousands of hectares of landholdings, no thanks to an Arroyo administration-issued executive order that keeps agencies from hiring unless they draw up a rationalization plan, he said.

Commenting on a specific case, De los Reyes said that hunger striker Dorita Vargas would likely receive a certificate of landownership award for Hacienda Canticbil Manalo by yearend.  The 63-year-old Vargas was among those who collapsed on Wednesday.

“It looks like it’s going to be given this year,’’ he said.

On the P1-billion credit promised by the President for the farmers, De los Reyes clarified that the final approval of the loan lay with the Department of Agriculture, not the DAR.

“They’re hitting us because we said,  ‘Why are you requiring an endorsement from DAR? The only thing we’re certifying is the fact that you’re an ARB (agrarian reform beneficiary),’” he said.  “Our message is that the P1 billion is already there. All you have to do is apply with  Landbank.”