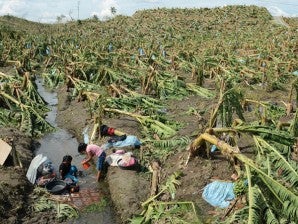 Congress has asked President Aquino to create a presidential task force to coordinate relief and rehabilitation efforts for the victims of Typhoon “Pablo” in the worst-hit provinces of Compostela Valley and Davao Oriental.

Before it went on a Christmas recess on Wednesday, the Senate unanimously adopted the House resolution calling for the  creation of the task force for the two provinces.

Congress said that complete focus was required in rebuilding the devastated areas and in bringing the affected families to normalcy.

The devastated region is likely to have a wet Christmas with an approaching low pressure area (LPA), according to the Philippine Atmospheric, Geophysical and Astronomical Services Administration.

Forecaster Buddy Javier said the LPA might reach the Philippine area of responsibility on Sunday evening and take the same path as Pablo, which blew with deadly force across Compostela Valley and Davao Oriental Dec. 4.

But there was only little likelihood that the LPA would intensify into a tropical storm. “It’s most likely that it will dissipate by Dec. 26,” Javier said.

Citing a report by the Department of Social Welfare and Development, the NDRRMC said the figure includes the P5.26 billion worth of emergency shelter assistance provided to more than 63,000 families whose houses were totally destroyed.

It also includes the continuing relief assistance to 245, 803 families worth P1.8 billion and livelihood assistance and cash-for-work program amounting to P2.5 billion and P402.7 million, respectively.

The NDRRMC said that 81 bunk houses—60 in Davao Oriental and 21 in Compostela Valley—were being built for the homeless residents.

The council said the number of fatalities had reached 1, 047 as of yesterday, with 692 bodies identified and 355 bodies unidentified. There are still 841 people missing. The number of injured has reached 2, 662.

The estimated cost of damage to infrastructure, crops and private property has reached P24.2 billion, it said.

Logs and timber that tumbled down the mountains during the typhoon will be used to build houses for the homeless, according to Environment Secretary Ramon Paje.

These include illegally cut logs and those that were uprooted by strong winds during the storm, Paje said in a memo to Social Welfare Secretary Dinky Soliman and Public Works Secretary Rogelio Singson seeking their help in the initiative.

Paje said the retrieval of fallen trees was part of preemptive measures by the DENR to “prevent possible log jamming and destruction of bridges and other vital infrastructures and facilities during the rainy season.”

The Geneva-based International Organization for Migration (IOM) announced that a $100,000 donation had allowed the agency to construct stormproof wooden houses for families left homeless during Pablo’s onslaught.

The houses will be handed to the Philippines government over the weekend and in time for people to move in before Christmas, IOM said in a press statement.

IOM has already delivered shelter materials, including toughened plastic sheeting, to protect 30,000 homeless people from the elements, and is reaching out to Filipinos at home and abroad to help the emergency aid and reconstruction appeal.

“There’s a desperate need to scale up the response to this emergency so that people can at least have a roof over their heads for Christmas,” said Brian Kelly, IOM’s Regional Emergencies and Post Crisis Adviser.

“We need funds to protect the vulnerable and disabled who have lost homes and loved ones and are literally destitute. We want to get them out of harm’s way and under cover. For this we need funds to purchase, distribute and build shelter for at least 5,000 families. Health and psychosocial care is also urgently needed.”

Thus far only 10 percent of IOM’s appeal for $7 million in Mindanao has been met. Funds have been promised by Canada and the United Nations from its emergency relief on top of the direct donation of $100,000 from IOM’s central emergency fund.

Individual Filipinos have started giving generously, with at least one donation of $1,000 received by IOM, the agency said.

IOM has developed a Donation Tracker website www.typhoon.iom.int  to allow individuals donate across the sectors where IOM delivers relief goods: emergency assistance; reconstruction; health and life-saving communications. Regular reports to the affected communities and through the media will keep people informed on how their funds are being spent and what aid is in the pipeline.