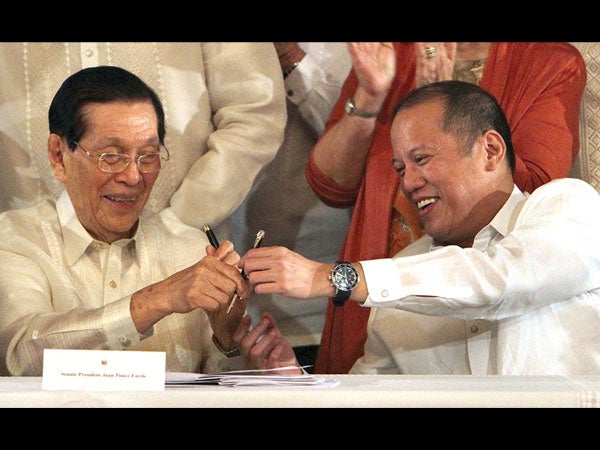 DONE President Aquino swaps sign pens with Senate President Juan Ponce Enrile after the signing of the landmark sin tax bill in Malacañang though the latter opposed it. LYN RILLON

“Today, we signed, finally—I repeat, finally—a law that will serve as an early Christmas gift for millions of Filipinos,” President Aquino on Thursday said after he affixed his signature to Republic Act No. 10351 (An Act Restructuring the Excise Tax on Alcohol and Tobacco) in Malacañang.

The President said he signed the “sin tax” law, projected to generate P33.96 billion in revenue in the first year of implementation, to help liberate “more Filipinos from the vices of smoking and drinking.”

The law raising taxes on tobacco and alcohol will be implemented starting Jan. 1.

Mr. Aquino said the law was a victory against the powerful tobacco lobby and would provide extra funds for better healthcare and facilities.

“The enemy was strong, noisy, organized and had deep pockets… but as I have always said, there is nothing that can stop Filipinos who are marching in the right direction,” the President, himself a smoker, said in a speech at the signing ceremony.

The tobacco lobby included lawmakers representing tobacco-growing regions as well as powerful cigarette companies that enjoyed one of the lowest tobacco taxes in Southeast Asia.

The country has the highest incidence of smoking in the region, with tobacco-related diseases costing the country P177 billion last year, according to the government.

Health Secretary Enrique Ona described the new law as “a game changer” and a “victory for the health of the Filipino people.”

Ona pointed out that the new law would discourage smoking in the country while injecting P146.7 billion into the country’s public health sector.

The President said the increased revenues would benefit more people under the universal healthcare program and enable Filipinos to avail themselves of new and/or improved clinics and hospitals.

He also delighted in the possibility of more and more Filipinos eventually quitting smoking and binge drinking because of higher excise taxes on cigarettes, distilled spirits and fermented alcohol.

“The fundamental principle of this law is unequivocal: We want health benefits within reach of everyone, rich or poor, because every Filipino’s life is sacred. We will elevate the quality of public health of our nation. This will be the key to the nation robustly benefiting from the opportunities (afforded by an) improving economy,” he said.

Witnessing the signing of RA 10351 were leaders of both chambers of Congress led by Speaker Feliciano Belmonte Jr. and Senate President Juan Ponce Enrile, members of the Cabinet, civil society partners and healthcare advocates, industry leaders and members of the business sector, representatives from the World Health Organization, and officials of the United States Agency for International Development and the World bank.

According to the President, the law will level the playing field for the tobacco industry.

“It’s unjust to have varying taxes slapped on similar products. We are correcting this. In the coming years, there will be unitary taxation which will open the door for a healthier competition in the industry, and avoid monopoly,” Mr. Aquino said.

He was referring to the law’s intent to have a gradual shift to unitary taxation to simplify the current multitiered structure for easier tax administration.

Mr. Aquino reiterated that tobacco farmers need not worry about the law’s impact on their livelihood.

“The benefits you have received in the past will not disappear,” he said, noting that the government would actually increase the tobacco-producing provinces’ share of the tobacco excise tax.

Mr. Aquino also thanked Enrile, who was seated beside him at the table, despite his staunch opposition to the law. “You have proved that through continued cooperation between different agencies of government, we will march forward toward a society that is fair, just and progressive,” he said.

Internal Revenue Commissioner Kim Henares explained to reporters that although the law would be effective immediately upon publication, there would no adjustment of prices before the new year.

“We will also be coming up with a revenue regulation and it will be published before the end of the year,” she said.

There are different classifications for alcoholic products: distilled spirits, fermented liquors and wine; and, in the wine category, sparkling wines, still (nonsparkling) wines and champagnes.

Henares said all these would have different tax classifications, with prices progressively increasing in the years to come.

It’s the same thing with beer. “It (tax) will become unitary by Jan. 1, 2017, and then it will go up 4 percent every year thereafter. And (for) the wine, the rate every year will (also) increase by 4 percent,” said Henares.

Asked if the increases would taper off at a certain point in the near future, Henares said, “No, it’s in ad infinitum.”

She said there was no sunset provision for the increase of 4 percent. “It’s 4 percent per annum forever, or until the law is amended.”

“So the ad valorem component increases while the price of the product increases. That’s the continued increase of 4 percent per annum plus the 20 percent of net retail price,” she added.

For the cigarettes, there will be a specific rate and it will become unitary on Jan. 1, 2017. Then, after that, every year it will go up by 4 percent.

Henares said the new law would not encourage smuggling of sin products, especially cigarettes, because their prices—even with the new excise taxes—would be much cheaper than those in neighboring countries.

“The other thing is … the law still provided that 15 percent of whatever excise tax is collected from tobacco products will be given to the tobacco-producing provinces to help the tobacco farmers,” she said.

“(I)f we collect the P33 and a half billion (pesos), it will be around P6 billion more than what they are already receiving now,” which was about P4 billion, she added.

In a statement, Ona said: “With higher prices, the number of young and poor people smoking and drinking excessively will be reduced significantly, resulting in a lower incidence of smoking-related noncommunicable illnesses such as lung cancer, heart attack, strokes and chronic lung disease as well as diseases associated with excessive drinking such as liver diseases and trauma secondary to drunk driving.”

The health secretary said the additional revenues that government would collect under the law would be used to fund the expansion of PhilHealth “to the second poorest 20 percent of our population,” which is composed of around 5.6 million families.

He said the additional taxes would also be used to expand health programs for tobacco and alcohol control, elimination of public health threats such as filariasis, malaria, schistosomiasis and rabies, the expansion of existing immunization programs, and additional hiring and deployment of doctors, nurses and other healthcare professionals. With reports from Philip C. Tubeza, Cathy Yamsuan and AFP