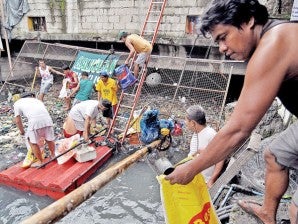 Residents living beside the Estero de San Lazaro in Sta. Cruz, Manila, pitch in to clean up the waterway of garbage swept into the area September 2012 photo. With the mounting garbage during the shopping and gift-giving holiday season, zero-waste advocates on Thursday, Dec. 20, 2012, called on the public to avoid “holitrash” by using reusable bags, properly segregating wastes and recycling materials. PHOTO BY RICHARD A. REYES

MANILA, Philippines—Christmas is a time for giving, not littering.

With the mounting garbage during the shopping and gift-giving holiday season, zero-waste advocates on Thursday called on the public to avoid “holitrash” by using reusable bags, properly segregating wastes and recycling materials.

Members of Buklod Tao donned Santa hats and held woven baskets with the words “reduce,” “reuse,” “recycle” and “respect” while “Santa Bayong,” a Santa Claus garbed in a big basket of woven leaves, greeted shoppers in Divisoria, Manila, to remind them of the consumer power to trim down the holiday trash by giving up plastic bags.

Tin Vergara, zero waste campaigner of EcoWaste Coalition, demonstrated how to use handkerchiefs, scarves and magazines as gift wrappers.

She also suggested giving gifts that do not need to be wrapped like books, plants and bead jewelry made from magazines.

Vergara called on the government to strictly enforce laws and measures to ensure the protection of public health and the environment.

“During these times when plastic consumption is enhanced by holiday consumerism, let us try to find ways to negate this destructive reality before it devastates us again,” Mother Earth Foundation chairperson Sonia Mendoza said, referring to massive flooding during typhoons.

“Let’s celebrate a simple and environment-friendly Christmas as a gift to nature,” Vergara said.

“Christmas is a season for giving, let’s not make it an excuse to generate trash,” she said.