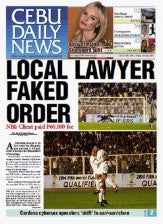 A Cebuano lawyer is in hot water for allegedly preparing a bogus court decision for annulment of marriage.

Luis Diores Jr. was recommended for charges of estafa through falsification of public documents by the National Bureau of Investigation in Central Visayas (NBI-7) based on the complaint of a female client.

The client, Aileen Colina Bell, asked the NBI to file a disbarment case and criminal charges against her legal counsel.

Bell, a resident of Mandaue City, said she consulted Diores in 2008 about a case she would be filing to annul her marriage to her German husband.

She said Diores accepted the case for a fee of P60,000 and asked for a down payment of P40,000, promising to have a court decision in one week.

When she returned with the P20,000 balance in Nov. 11, 2008, said Bell, she was given a photocopy of a court decision purportedly issued by Regional Trial Court Judge Olegario Sarmiento Jr., who presides over Branch 24, which is designated to hear family cases.

Bell said she was “shocked to learn” two years later, when she tried to have the document authenticated in the court, that the court order was fake.

The NBI-7 is looking into the issuance of other bogus court orders.

The names of at least two Cebu RTC judges, Sarmiento and Ester Veloso, turned up in fake decisions for annulment of marriage.

The discovery was made after the National Statistics Office (NSO) noticed a typographical error in one document and went to Judge Sarmiento’s court to verify it.

This prompted the Local Civil Registrar in Cebu City to ask for specimen signatures of all 22 RTC judges in Cebu.

Diores wasn’t available for comment for this story. He has been lying low over his other legal troubles. A staffer in his law office in B.F. Paray Building along Osmeña Boulevard, Cebu City, told CDN by phone that Diores hasn’t been going to the office for almost a year.

Diores, who was executive vice president of Pacific Lenders Inc., is facing a string of court cases in Cebu City on charges of estafa and violation of Batas Pambansa Bilang 22 or the Anti-Bouncing Check Law.

In April 2010, he was convicted of estafa by RTC Judge Veloso of Branch 6 for swindling a couple who paid him P1.65 million. He didn’t show up when the decision was promulgated. He was sentenced to four years to 20 years in prison.

RTC Judge Meinrado Paredes, who earlier alerted the Local Civil Registrar about fake court decisions, said he first learned about this from revelations of a secretary in another law office, who said this fraud was being routinely done for a fee. Paredes would not identify the woman or the law firm since the NBI inquiry is ongoing.

Earl Bonachita, president of the Integrated Bar of the Philippines (IBP) Cebu City chapter, said of the discovery: “It’s a sad incident because it will erode the trust of the public in our justice system.”

But he said the IBP chapter would investigate only if a formal complaint is filed with their office.

He said he hasn’t seen Diores for about two years now.

“If proven true, that (allegations against Diores) will tarnish the reputation of the legal profession and will affect the trust of the people in lawyers and the court,” Bonachita said.

Bonachita said one of his clients sued Diores for violating the Anti-Bouncing Check Law but Diores didn’t attend court hearings, which prompted the judge to waive his right to present evidence in his defense.

Other persons may be involved in the racket and should also be held liable, said Bonachita.

“Being guards of the rule of law, lawyers should not tolerate these kind of shenanigans or unlawful activities,” Bonachita said.

“Any lawyer involved in making fake court decisions must be disciplined because it is highly unethical and illegal,” said Barcenas, who is presently a director of the Philippine National Oil Company’s Shipping and Transport Corp.

“It’s a shame to the profession. The persons involved in this reprehensible act of making fake decisions must be punished and even disbarred, if proven true,” he added.

To ensure such fraud doesn’t continue, Judge Paredes said the Local Civil Registrar should call up the court or personally visit to verify the authenticity of court decisions presented to it.

So far the fake decisions have turned up in cases of annulment of marriage.

Paredes said a lawyer once confided in him that an employee in his law firm was found making fake court decisions and was terminated.

The NBI-7 is conducting an investigation upon the request of Judge Veloso of Branch 6.

Both Judge Veloso and Sarmiento are assigned to family courts, a special venue for cases involving family relations and children.

The NSO in Manila didn’t release a certification for a woman’s marriage contract after finding out that the misspelled name of Judge Sarmiento in an order of “nullity of marriage” wasn’t just a typographical error.

The document itself was fake and the docket number of the case referred to another court.

Judge Sarmiento’s name was also misused in the fake court decision obtained by lawyer Diores in 2008 for his client, Bell.

Bell, in her complaint-affidavit, said the lawyer only gave her a photocopy of the supposed court decision for annulment.

She said Diores told her that the original copy will be sent to the NSO.

“He instructed me not to show the court decision to anybody because he might be questioned on the fast resolution of the case,” Bell said.

It was not clear in the account, however, why Bell would think a court order of annulment obtained in a week, without her undergoing a legal proceeding, would be authentic.

In her complaint, she said she discovered the document was fake two years later in 2010 when she had a pending tourist visa application with the German Embassy.

As a requirement, she said she showed an authenticated copy of the annulment case, which was allegedly issued by Judge Sarmiento.

She said she was “shocked” to learn on June 7, 2010, from the clerk of court that the court decision was fake.

She sought the assistance of the NBI-7 and asked the office to file a disbarnment case against the lawyer. The NBI instead recommended filing charges of estafa through falsification of public document.