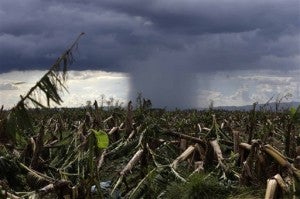 Among those left jobless is 45-year-old Rey Latras.

Standing near a house with roofs and walls blown away by the typhoon, Latras’ face was gloomy as he revealed that banana farm workers like him, who made up the bulk residents of Barangay (village) Babag, had also lost their jobs.

The ComVal Tropical Fruit Inc., the banana company they had worked in, has announced it was finally phasing out its plantation in the village because it has been badly wasted by the typhoon.

Not a single stalk of banana was left standing within the CTFI’s 300-hectare plantation, which covers Babag and Barangay Naboc.

Babag Barangay Chairman Romeo Aquino said the typhoon came when the company thought it was about to gain control over the Panama wilt disease that had brought about huge loses.

“Even before the typhoon, beleaguered by the Panama wilt disease, the company already laid off 176 of its workers,” Aquino said. “The company also left unplanted some 100 hectares of land they believed was contaminated by the disease.”

“So, for a while, we thought we were doing well, until the typhoon came, gitiwasan (finished off),” he said.

Only about an hour’s drive from the main highway, Babag, a community of banana farm workers, has 803 households (roughly 3,700 people).

Aside from CTFI, other banana plantations had also decided to shut down operation, although it was not clear if it would be permanent as well.

In the adjacent Compostela Plantation Inc.—operated by Japanese fruit grower Sumitomo Fruits—only a few people were left as managers and other staff had made themselves scarce after typhoon Pablo’s advent.

“Workers are seeking them out after the typhoon, but they have stopped coming,” Latras, who is also a purok leader, said.

Bernadette Toledo, chief executive officer of the Mindanao Alliance of Self-Help Societies – Southern Philippines Educational Cooperative Center (Mass-Specc), said the 1,000-hectare banana plantation venture of one of their member-cooperatives in Davao del Norte suffered damage of more than 80 percent and that rehabilitating it would entail massive amount of money.

In Davao City, the Pilipino Banana Growers and Exporters’ Association (PBGEA) placed the total damage to banana plantations in southern Mindanao at 14,732 hectares.

“Almost all banana plantations in Compostela Valley and Davao Oriental were wiped out, rendering many people out of work,” PBGEA president Alex Viloria said.

“We are concerned by the economic displacement wrought by the typhoon,” Stephen Antig, also a PBGEA official, said.

Antig said most PBGEA members have been assessing the extent of the damage wrought by the typhoon on their plantations and facilities to be able to come up with a road map to recovery.

“It would cost banana companies P500,000 to rehabilitate one hectare or maybe even higher as some of the plantations were totally wiped out, hence, had to start from scratch,” Viloria said.

Due to the projected cost of rehabilitation, the banana industry has appealed to the national government to make available at least P7.5 billion to fund the recovery efforts, especially for small banana growers.

“Their homes, their farms, totally wiped out, but over and above it all, it’s a total annihilation of their livelihood,” Viloria said.

He said unlike in past calamities that struck Compostela Valley, for example, plantation workers had nothing to turn to this time because even rice and corn farms had been wiped out by typhoon Pablo.

“Today in Compostela Valley, everything is gone,” Viloria said.

Rehabilitating the damaged banana plantations would not be as easy as it seemed because people have been struggling just to secure their daily meals, said Viloria.

Aquino said some residents have thought of planting corn as a temporary means to gain income because unlike bananas—which would need 10 months to grow—corn could be harvested in just 105 days.

Compostela Valley Gov. Arturo Uy said that aside from plantation workers, the small-scale gold miners also suffered as a result of the typhoon.

“Rehabilitation (in this sector) could take several months so again, thousands would have no income,” he said.

At least 100, 000 people are said to be working in mining sites in Compostela Valley and also in Davao Oriental—the areas hardest hit by the storm.

Uy said the government, through the Department of Agriculture, has planned to introduce the cultivation of corn and other quick “cash crops” to help typhoon victims earn money while waiting for the full recovery of the banana, rice and mining industries.

Meanwhile, representatives of the World Food Programme and the Australian Agency for International Development (AusAID) visited typhoon-ravaged communities in Davao Oriental on Wednesday.

WFP country coordinator Stephen Anderson and Geoff King, AusAID counselor, talked with typhoon victims in the towns of Cateel, Baganga and Boston to determine their needs and their condition.

Earlier, the Australian Embassy in Manila announced that Canberra would be releasing additional support for the government’s typhoon Pablo relief operations.

Anderson said he and King witnessed the ongoing relief operations in the  towns.

But Anderson admitted that more efforts should be done, especially in the rehabilitation of all aspects of the typhoon victims’ lives.—With a report from Frinston Lim, Inquirer Mindanao