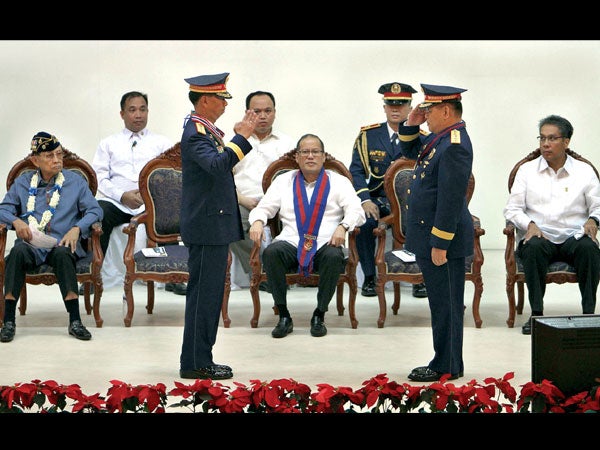 In a speech at the turnover of command at Camp Crame on Tuesday, the President warned hoodlums, drug addicts, bullies, abusive and corrupt PNP members that their days were numbered.

Mr. Aquino devoted much of his lengthy speech, which was delivered in Filipino, reminding the 148,000-strong police organization of its image problem in the eyes of a wary public.

He said that he had already presided over three change-of-command ceremonies in the PNP, but he noted that bad eggs continued to “soil the agency’s reputation.”

“We will never allow those expected to serve the country themselves to lead in committing anomalies,” Mr. Aquino said, stressing that the “straight path” would not tolerate uniformed police officers driving without a helmet or license, and displaying utak wangwang (abusive behavior) that only obstructed reforms.

The President bade goodbye to outgoing Director General Nicanor Bartolome, commending him for his “honest and reliable service,” and for having instituted a “one-strike policy” against erring police directors assigned to areas with rampant jueteng, or illegal gambling, operations.

“He had to quit his post ahead of time to give way to the new leadership who will be tasked with safeguarding the next elections. With this decision comes ample time to prepare the police for achieving a clean and peaceful election. To Nic: Thank you for your concern and for voluntarily serving our country. Mabuhay ka, Nic (Long live, Nic),” said the President.

The President had publicly asked Bartolome, who was officially due to retire on March 16, to contemplate an early retirement to ensure smooth preparations for the 2013 midterm elections.

Mr. Aquino pointed out that Bartolome had done his share in the administration’s quest to cleanse the PNP of misfits.

Some of Bartolome’s accomplishments included going after “most wanted persons….” and pushing for the “PNP Peace and Order Agenda for Transformation and Upholding of the Rule of Law or PNP P.A.T.R.O.L. Plan 2030,” Mr. Aquino recalled.

In a well-applauded message to police officers who accepted bribes in exchange for the destruction of the environment, played blind to illegal logging, used illegal drugs, or engaged in reselling seized drugs, or got involved in robbery and mulcting, he said.

“Your days are numbered. My order is unequivocal—following the law is not optional. Once our paths cross, you would not only surrender your badge and uniform. We will replace these with an orange T-shirt (emblazoned) with a big letter ‘P’ (for prisoner) at the back.”

To erase the doubts and fears of the citizenry toward the police, all members of the police organization should band together and do their share in improving the image of the PNP, the President said.

This, he said, would help breed a “culture of honor and heroism in your ranks,” so that the public would “feel secure, not fearful every time they see you.”

Mr. Aquino confessed to having personal ties with Purisima, who served as aide to his mother, the late President Corazon Aquino, in 1987.

Since then, he said that their “association and relationship” bloomed even during times when Mr. Aquino was in the opposition, as congressman and later senator.

“Thus, I have utmost confidence that he would only side with what is right, and for sure he would cause extraordinary change in the police ranks compared to the system we inherited,” said the President.

The crucial test of leadership for Purisima will come during the May 2013 polls, he said.

“Our goal: for the entire police organization to serve as a monument of honor and integrity, successfully maintaining peace and order, especially in the coming elections. This maybe is the first challenge to your new leadership: The people are hoping that you could ensure order from the height of the campaign season to the close of the polls,” said Mr. Aquino, referring to the intent of the Secure and Fair Elections (SAFE) task force for the 2013 polls.

“We all know that only through free elections could we ascertain the real decision of the nation: Should we continue treading the straight path, or should we (place our bets on) those threatening to hale us back to the crooked system?” Mr. Aquino said.