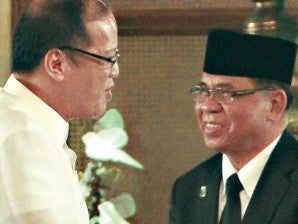 ILIGAN CITY—President Aquino on Monday issued an executive order creating a commission that will hammer out a proposed law creating a new autonomous government in Mindanao, the next step to fulfilling an agreement with Moro guerrillas who had given up separatism for broader self-rule.

Ferrer, a University of the Philippines professor who replaced now Supreme Court Justice Marvic Leonen as head of the government panel, said by phone that the commission’s work can proceed side by side with ongoing talks on how much power the new autonomous government can exercise, how much wealth it would keep for itself and share with the national government and how large a territory it would govern.

Ferrer said the objective “is to install the Bangsamoro … as soon as possible in order to have an elected Bangsamoro government by 2016.”

Ferrer said while the commission can examine the Constitution and recommend changes, “the President has made it clear that constitutional change is not his priority during his term.”