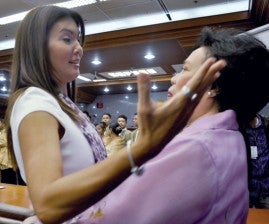 VICTORY HUG Senators Pia Cayetano and Miriam Defensor-Santiago, sponsors of the reproductive health bill, embrace each other after the Senate approves the measure. ARNOLD ALMACEN

Senators Miriam Defensor-Santiago and Pia Cayetano embraced each other as they stood in the middle of the session hall, while Senate President Pro Tempore Jose “Jinggoy” Estrada announced Monday night the 13-8 vote approving the reproductive health (RH) bill.

It was a long-delayed triumph for both women who gained enemies for their defense of what they believed was a measure that would give a woman the choice to determine the number of her children, meet a teener’s need to be protected from an unplanned pregnancy and educate citizens about sexual health.

“There is no force more powerful than an idea whose time has come and that idea today is the RH bill,” Santiago said. Before the voting, the bill had languished in Congress for 13 years.

A quarter before 8 last night, senators approved Senate Bill No. 2865 on third and final reading, less than an hour after they did the same on second reading.

The vote in the Senate paves the way for the measure to become law after the House of Representatives also approved on third reading last night the bill that President Aquino had certified as urgent.

The “miracle” that anti-RH groups were waiting for did not materialize, as the House voted 133-79-7 to pass House Bill No. 4244 on final reading, increasing the winning margin to 54. In the second reading on Thursday, the chamber voted 113-104-3.

The two chambers will have to reconcile their versions of the bill in a bicameral conference committee so Mr. Aquino can sign the measure into law.

Senate leaders have yet to name their representatives to the bicameral conference that Santiago wants to convene Tuesday.

Malacañang hailed both houses of Congress for their “historic vote” and crafting a law “that can truly address the needs of our people.”

“The people now have the government on their side as they raise their families in a manner that is just and empowered,” presidential spokesperson Edwin Lacierda said. “It begins a process of healing for the wounds that may have been opened by an often feisty democracy.”

Albay Rep. Edcel Lagman, sponsor of the House bill, was optimistic that the bicameral committee would face no serious roadblock in reconciling contrasting provisions with the Senate version. He said the committee could meet Tuesday and have the final version ready for ratification by Wednesday.

“Before the end of the year, it will become a law as long as we can harmonize the differing provisions in the bicameral conference committee,” Lagman told reporters.

“Considering that these two bills are mutually identical from the start and the differences were in the period of amendments, I don’t think the differences are insurmountable. We could fast-track the forging of a bicam report, I think, within a day.”

Senators Manuel “Lito” Lapid and Sergio Osmeña III were not in the session hall during the vote.

“I will not gloat. In fact, my work has just begun. … This is for every woman wallowing in poverty, for those who don’t even know they have the right not to be beaten up by their partners,” Cayetano said after the head count to emphasize the continuing struggle for women’s rights.

Cayetano failed to fight tears as she thanked all those who supported her efforts for the past 17 months in having the measure approved.

Santiago, in turn, cited Nicolaus Copernicus who contradicted Catholic teaching at a time when the Church insisted that the sun revolved around the Earth.

“The Catholic Church has made many mistakes because it is a human institution,” she said. Santiago’s statement appeared to be indirectly addressed to religious groups against the RH bill.

Fear of a Catholic backlash appeared to be one of the biggest reasons Congress’ decision to pass the RH bill that had been derailed since it was first introduced in 1995.

Sotto and Enrile, the most rabid among anti-RH senators, have openly sided with the Church hierarchy in shooting down the measure.

Other senators stood up after the head count to explain their vote.

Angara cited the rising number of teenage pregnancies as an imperative for his “yes” vote.

Arroyo warned he would change his “yes” vote should drastic alterations be made in the Senate version during the bicameral conference.

Minority Leader Cayetano said the RH bill’s approval was not tantamount to a promotion of promiscuity. “We should fight misconceptions if we want to help our people,” he said.

Estrada lamented the wedge driven between the Church and RH supporters because of the measure.

Escudero said he was against abortion, but supported the rights of women and children, especially the unborn.

“I want to give all Filipinos equal opportunity, men and women, young or old, that’s why I favor the RH bill. I do not favor premarital sex. I am for the protection of the rights of women and children,” he said.

Before the vote, Sotto’s proposal to delete the word “satisfying” in the definition of reproductive health was met with vehement objection from the Senate’s three women members. This forced him to withdraw this amendment.

Sotto initially explained that the word “satisfying” ran counter to the “conservative” culture of Filipino women.

The three women senators stood up one by one and blasted Sotto’s statement. Cayetano and Legarda said Filipino women had the right to have satisfying sex.

Santiago went to the extent of vowing to file a bill that would penalize a husband “who does not give satisfying sex to his wife.”

In explaining his vote, Guingona said the bill was “about our dreams and aspirations,” and the country’s future. Lacson lauded those who opposed the bill for allowing the majority rule to prevail.

Honasan noted in his explanation that he was living in a highly matriarchal family.

Legarda dedicated her “yes” vote to Filipino women, while Marcos noted the agony of young people when faced with “a situation they are ill-prepared for,” thus his promise to improve “the pathetic state of affairs” by voting for the RH bill.

“What bothers me is a proposal wrapped in a condom argument,” Pimentel said. “I cannot accept the twisted rationale to legislate what is better left to the conscience of married couples,” he added.

Recto appealed to sponsors to maintain fidelity to the version approved by the Senate during the bicameral conference.

“I hope dead provisions would not be resurrected like zombies and newly birthed ideas not aborted in the third chamber,” he said, referring to the bicameral panel.

Revilla revealed he was the third senator whose child was born with complications after his wife took pills in the early stages of pregnancy.

“My daughter’s name was Maria Alexandra. She was born in 1990 and lived only for 26 days because of heart complications as Lani took pills not realizing she was already pregnant,” Revilla said, his voice shaking.

Apart from Revilla, Lapid and Sotto confessed during RH interpellations that their wives had given birth to babies suffering from complications due to pills the women took while pregnant.

“Why can’t we spend the money on infrastructure or projects to help poor people, instead of using it to buy harmful things?” Revilla said.

Sotto noted that Malacañang certified a contentious bill as urgent, instead of measures that were “more necessary.”

“If Cory Aquino were alive, this bill would not even reach first base,” he said.

Enrile, who cast the last vote, said the bill “inflicted a very wide chasm of division” not only in the chamber but also in Philippine society.

“I hope this bill we now dispose of tonight will bring the benefits it seeks to accomplish,” he said.

In the House, RH bill supporters, clad in purple, shouted in jubilation from the gallery as soon as Deputy Speaker Arnulfo Fuentebella announced the results.

After the vote, supporters of the bill gave out purple orchids to lawmakers and applauded them as they left the session hall to greet fellow advocates.

A dismayed Antipolo Bishop Gabriel Reyes said the House made a “big mistake” by passing the bill. “We tried hard (to campaign against it) because we are convinced that it’s bad for people, not only Catholics, but all people,” he told reporters.

Reyes attributed the wider margin of victory for the RH bill to the President’s certification and to “pressures” exerted by Malacañang on House members.

Lagman downplayed the impact of the President’s certification of the bill. “The inherent merit of the RH bill was its badge for passage and the presidential certification was the assurance for its approval,” he said in a statement.

“While the certification by the President of the necessity for immediate enactment of the RH bill sealed its enactment, the intrinsic merit of the measure and its laudable objectives galvanized legislators’ support and justified the presidential endorsement,” he said.

Conspicuously absent during the voting was Sarangani Rep. Manny Pacquiao, who was celebrating his birthday Monday. He voted against the bill last Thursday.

The anti-RH bloc also missed the vote of Fuentebella, who was asked to preside over the proceedings. This allowed Deputy Speaker Erin Tañada to cast his vote in favor of the measure.

Parañaque Rep. Roilo Golez, a staunch opponent of the RH bill, did not help his group’s cause when he abstained. Deputy Speaker Raul Daza, another known critic of the bill, was again not present on the floor.