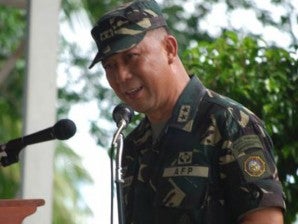 A newly retired military general facing a plunder suit in the Department of Justice took his oath on Thursday as new head of the Bureau of Corrections (BuCor) before Justice Secretary Leila de Lima.

Pangilinan was appointed new BuCor director by President Aquino on July 19, three days before he retired from the service on July 22 on reaching the mandatory retirement age of 56.

He replaced Ernesto Diokno, the President’s shooting buddy, who resigned on May 30 amid controversy.

Diokno quit after it was discovered that convicted killer former Batangas Gov. Jose Antonio Leviste had been leaving the New Bilibid Prison on day trips without authorization and supposedly at will.

“I take this is a challenge because (reforms in BuCor) are the most pressing concern of the secretary, among the many cases (being handled by the DoJ),” Pangilinan told reporters after his took his oath.

“I’ll have a lot of catching up to do. This is a totally different (environment) from what I grew up with in the military. I know I’ll have to adjust,” he said.

Some justice officials, however, questioned Pangilinan’s ability to implement much-needed reforms in the graft-laden prisons bureau given the nature of the charge against him.

“Personally, I think Malacañang should have been more circumspect and discriminating in appointing people to sensitive positions like the BuCor,” said a senior justice official who asked not to be named for fear of reprisal.

Pangilinan, the official told the Inquirer, should have declined the appointment “out of delicadeza.”

“If the President was sincere about his tuwid na daan slogan, he should not have appointed somebody who is facing a serious criminal complaint like plunder,” he said.

“That plunder case is just a charge. That is just a fabrication of Rabusa. We will answer that in the right forum,” he said.

Pangilinan submitted his counter-affidavit in the case on Tuesday.

As for the case affecting his new job, he said: “We are professionals. Even if I’m with the DoJ, I will not … attempt to influence the people of the panel.”

“I’m really surprised. I don’t understand why he was given a position. Maybe you should ask Malacañang,” he said.

As for Pangilinan’s assertion that the case was a fabrication, Rabusa said: “I know him so well. I know him from head to toe. I’ve been with him since our days in the PMA and when I was a young lieutenant.”

Rabusa belongs to Philippine Military Academy Class 1981 while Pangilinan is a member of Class ’79.

“The case I filed was not a fabrication. It was based on documents and witnesses’ testimonies. I also personally know that (military fund conversions) happened because I was part of it,” he said.

As for De Lima, she said that being Mr. Aquino’s alter ego, she respected his prerogative in naming Pangilinan as BuCor director.