Abadilla 5 may soon be free–De Lima 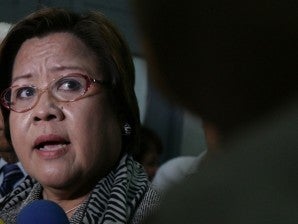 The “Abadilla 5,” languishing in prison for years now, could finally be home for Christmas.

A recommendation to grant executive clemency to the five convicted killers of Lt. Col. Rolando Abadilla in 1996 is just awaiting the signature of President Aquino.

Justice Secretary Leila de Lima said she hoped the President would act favorably on her recommendation.

“I’m hoping that it would be acted upon in time for Christmas. I think there’s a chance. But of course that’s the prerogative of the President,” De Lima said in an interview at Ateneo de Manila University in Quezon City.

Malacañang, for its part, said the recommendation was being reviewed.

The Department of Justice’s Board of Pardons and Parole recommended the commutation of the sentences of the five convicts in November 2011, but De Lima pushed  for conditional pardons instead.

In a commutation of sentence, a convict has to acknowledge guilt. No such requirement is called for in a conditional pardon, but it could be revoked if the convict commits another crime, according to De Lima.

“To me there’s a moral certainty about the lack of reasonable doubt,” she said, explaining the main reason for her recommendation of an executive clemency to the President.

De Lima cited the fact that some justices dissented in the Supreme Court decision upholding the conviction of the accused.

She also recalled that when she chaired the Commission on Human Rights, questions about the credibility of the witness nagged her.

“For some justices, the guilt of the accused was not established beyond reasonable doubt. There is doubt of their guilt,” she said. “There are circumstances pointed out in the dissenting opinion that create doubt on the correctness of the verdict up to this very day. Those accused have professed their innocence. They’re very passionate about this.”

The five vehemently insisted they were innocent and accused their police captors of torturing them into admitting the crime.

Abadilla, an intelligence chief of the defunct Philippine Constabulary who gained notoriety as an alleged torturer of political prisoners during martial law, was killed while his car was stopped in traffic on Katipunan Avenue in Quezon City on June 13, 1996.

The communist-led hit squad Alex Boncayao Brigade (ABB) claimed responsibility for the killing. They turned in Abadilla’s watch to “running priest” Fr. Robert Reyes as proof of the deed.