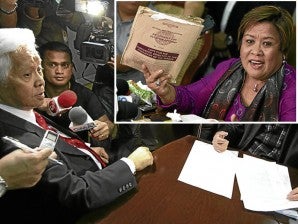 A police team that admitted stealing election returns (ERs) kept in the Batasang Pambansa building has told Justice Secretary Leila de Lima they targeted the ERs from 6,000 precincts in their cloak-and-dagger operation to ensure Gloria Macapagal-Arroyo’s victory in the 2004 presidential election in case of a recount.

De Lima on Thursday said the stolen ERs could involve as many 1.2 million votes—roughly matching Arroyo’s 1.1-million-vote margin over the late Fernando Poe Jr.—and that she was told the operation to substitute fake returns for genuine ones carried out in 2005 was funded by a certain “FG.”

She did not say who FG was but the initials have been generally used in the media to refer to Arroyo’s husband, former First Gentleman Jose Miguel “Mike” Arroyo.

Although the alleged operation happened six years ago, it has grabbed headlines after Senior Supt. Rafael Santiago and five of his men personally went to the Inquirer offices the other night and—for the first time—revealed that they were the police officers who carried out the operation.

Malacañang said the decision of the policemen to come out was “a breakthrough” in the long-running controversy about alleged rigging of the 2004 election by the Arroyo camp.

Arroyo has repeatedly denied allegations she cheated the late Poe of victory.

In the wake of the revelations made by Santiago’s group, another person linked to the vote-tampering operation on Thursday surfaced and produced another seemingly damaging piece of evidence.

Retired Lt. Joel Pinawin went to the office of Sen. Panfilo Lacson and turned over to him a collection of short video clips showing footage of men supposedly engaged in the switching of ERs at the South Wing lobby of the Batasang Pambansa building in 2005. Video available here.

“Our persecution continues. We are continuously being vilified and maligned based on hearsay evidence. I don’t know these people who are spreading these lies about me,” he said.

De Lima said at a news briefing that Santiago had told her that based on his recollection, the operators who planned the Batasan break-in “targeted” to get the second copies of 6,000 ERs, mostly from Mindanao.

“I think it was discussed among those who planned (the break-in)… they targeted 6,000 precincts or 6,000 election returns. That would still be validated, that would be part of the joint investigation,” De Lima said.

“Assuming there are 6,000 precincts, how many voters per precinct? Two hundred. That’s the total number of registered voters in each precinct in previous elections… 200 times 6,000, [that’s] 1.2 million.”

De Lima said that, according to Santiago, “the funding came from FG. As to whether Santiago had personal knowledge about that or just heard it from either Franco or Ebdane, that one I do not know yet. Maybe that could be clarified.”

In a dinner the other day with De Lima and Inquirer editors and reporters, Santiago said he and his trusted men carried out the Batasan operation on the orders of then PNP Director General and now Zambales Gov. Hermogenes Ebdane Jr. to the then Special Action Force (SAF) director, Chief Supt. Marcelino Franco.

Santiago said his men helped smuggle the bogus returns into the Batasan building and another team substituted these for the genuine ERs in case a poll recount became necessary. No recount happened following a Supreme Court ruling.

Santiago handed over to De Lima some of the ERs which he said his team was able to save and keep in their clandestine operation.

Asked if Mike Arroyo could be summoned to an investigation, De Lima said: “If implicated in the sworn statement or testimony of others, then I see no reason why not.”

De Lima said Santiago’s disclosures could not nullify Arroyo’s 2004 victory because of “factual, legal, and constitutional impossibilities,” but they could make those who rigged the election results accountable for their crimes.

The justice secretary said the ERs turned over to her by Santiago and his men would have to be looked into first before it could be said that the votes for Poe from these returns would be “numerically sufficient” to overcome the margin posted by Arroyo in the official canvass.

Asked if those ERs would be enough to declare that Arroyo was an illegitimate President, De Lima said: “I would not know if the supposed product of the dagdag-bawas (padding-shaving) would be numerically sufficient to overcome the 1.1 million proclamation margin of the former President, but what we have here are clear signs, tell-tale signs of cheating, because why resort to such kind of operations?”

In his verbal allegations, Santiago also implicated Roque Bello, a former Commission on Elections (Comelec) supervisor, his son El Bello, and 10 other men who purportedly took part in producing the fake ERs, as well as Chief Insp. Ferdinand Ortega, then chief of the SAF unit in charge of security at the Batasan complex.

Santiago headed the SAF’s intelligence division for Metro Manila at the time of the alleged ER-switching.

According to Santiago, the operation was prompted by the election protest filed by Poe’s widow, Susan Roces.

Brillantes said the revelation of Santiago and his men was the one he had been seeking when he was pursuing the election protests of Poe and running mate Sen. Loren Legarda. Brillantes had been their lawyer before he was appointed to the Comelec post.

De Lima, on the other hand, was the lead counsel of prominent opposition candidates in the 2007 senatorial election.

“We know he (Santiago) is telling the truth,” Brillantes told reporters. “We aired that in the protest, that’s why I know it’s true. The ballots [at Batasan] really have different contents. The ones shown to Secretary De Lima, those were the authentic ERs… It means those in Congress are fake.”

He said Santiago’s claims would be looked into by the joint Comelec-Department of Justice investigating committee to be formed next week.

He said the two agencies would look into the allegations of electoral fraud and sabotage in the 2004 and the 2007 national elections.

De Lima said there was really nothing that could be done if it turned out that Poe won in 2004.

“First of all, FPJ is gone. Second, the (contested) term is over,” she said.

Should it turn out that Poe had won over Arroyo, De Lima said “it would only be incidental.”

“It would just be stating facts, stating certain findings, but not to say that he or she is the real winner,” she added.

De Lima said that based on her meeting with Brillantes and on the premise that Santiago’s group was telling the truth, the Batasan operation targeted Mindanao and the second copy of the ERs. The second copy is the one sent to Congress for canvassing.

Lacson received eight video clips from Pinawin. Their total duration was 56 seconds. Copies of the videos were later given to the media.

Lacson said he was now trying to convince retired Insp. Ramon Garcia, the police official who supposedly took the videos using a cellular phone, to come out and testify.

“Little and big secrets are starting to come out of the woodwork,” Lacson told reporters.

“We need the testimony of the one who actually took the videos and those of the other members of the team. I hope they can still come out in the open to corroborate (the accounts).”

Lacson said that Pinawin, who now works at the Bureau of Customs, was merely a custodian of the videos, which were reproductions of the original copies still in the possession of Garcia.

The videos show a number of men going in and out of an area in the Batasan South Wing where the ERs were kept. They were seen carrying ballot boxes. One clip showed a copy of an election return.

Lacson said he was aware of reports that the group of Pinawin had previously attempted to offer to certain political figures evidence it had about the supposed election fraud, in return for some amount.

“The thing is, why would you keep the authentic ERs, which are still in your possession? Why do you have a video? You’re right, to the malicious mind, perhaps they were planning something later on,” Lacson said in Filipino.

Presidential spokesperson Edwin Lacierda said the decision of Santiago and his men to tell what they knew “is certainly a breakthrough because prior to that, people have not been coming out in the open.” With reports from Norman Bordadora and Christine O. Avendaño