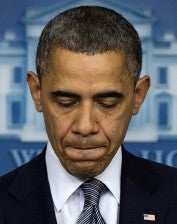 WASHINGTON— A tearful President Barack Obama said Friday he grieved first as a father about the massacre at a Connecticut elementary school, declaring, “Our hearts are broken today.” He called for “meaningful action” to prevent such shootings but did not say what it should be.

“The majority of those who died were children — beautiful, little kids between the ages of 5 and 10 years old,” Obama said.

At that point he had to pause for several seconds to keep his composure, and he wiped his eyes.

The scene in the White House briefing room was one of the most emotional moments of Obama’s presidency. Near him, two senior aides cried and held hands as they listened to the president.

Some 27 people, including 20 children, were killed when a gunman opened fire inside the school. The shooter blasted his way through the building as young students cowered helplessly. The dead included the shooter.

The story jolted parents and other people across the nation, and the White House was no different.

Obama began his comments with no greeting. He ended them with words of Scripture, walking away in silence.

He recited the future milestones lost, and had to pause again to gather his words.

“They had their entire lives ahead of them — birthdays, graduations, weddings, kids of their own,” the president said of those who were killed.

He ordered that U.S. flags be flown at half-staff on public grounds through Tuesday.

As the president received briefings about the shooting, his spokesman, Jay Carney, responded to questions about gun control and Obama’s campaign promises on the matter by saying “I don’t think today is that day” for such a discussion.

Others, however, said it was.

“If now is not the time to have a serious discussion about gun control and the epidemic of gun violence plaguing our society, I don’t know when is,” Rep. Jerrold Nadler, a Democrat, said in a statement.

The president himself signaled a desire for action, but he was not specific.

“As a country, we have been through this too many times,” Obama said. “We’re going to have to come together and take meaningful action to prevent more tragedies like this, regardless of the politics.”

During Obama’s time in office, mass shootings have shaken communities in Wisconsin, Texas and Colorado.

The latest attack comes less than two weeks before the Dec. 25 Christmas holiday. It appeared to be the nation’s second-deadliest school shooting, exceeded only by the Virginia Tech University massacre in 2007.

Obama spoke from the “James S. Brady Press Briefing Room,” named in 2000 in honor of the former White House press secretary, James Brady, who was shot and disabled in the assassination attempt on Ronald Reagan in 1981. Brady and his wife, Sarah, have become activists for gun control.

The president and his wife, Michelle, have two daughters.

“Michelle and I will do what I know every parent in America will do, which is hug our children a little tighter,” he said. “But there are families in Connecticut who cannot do that tonight, and they need all us of right now.”

Said Obama: “He will have every single resource that he needs to investigate this heinous crime.”