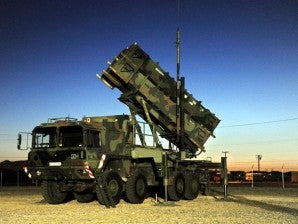 In this Feb. 15, 2012 file picture a Patriot surface-to-air missile battery stands on the training ground of the German Bundeswehr in Fort Bliss near El Paso, Texas, USA. German parliament will decide Friday Dec. 14, 2012 to send Patriot air defense missiles to Turkey as part of a NATO mission to prevent violence from spilling over from across Syrian border. Once approved by parliament, the mandate will allow 400 German soldiers to be stationed there too . AP

INCIRLIK AIR BASE, Turkey — The U.S. will send two batteries of Patriot missiles and 400 troops to Turkey as part of a NATO force meant to protect Turkish territory from potential Syrian missile attack, the Pentagon said Friday.

Germany and the Netherlands have already agreed to provide two batteries of the U.S.-built defense systems and send up to 400 German and 360 Dutch troops to man them, bringing the total number of Patriot batteries slated for Turkey to six. The German Parliament is expected to formally agree to the deployment on Friday. NATO foreign ministers endorsed Turkey’s request for the Patriots on Nov. 30.

A number of Syrian shells have landed in Turkish territory since the conflict in the Arab state began in March 2011. Turkey has condemned the Syrian regime of President Bashar Assad, supported Syrian rebels and provided shelter to Syrian refugees. Ankara is particularly worried that Assad may get desperate enough to use chemical weapons.

During a brief stop at Incirlik Air Base, Panetta told U.S. troops that Turkey might need the Patriots, which are capable of shooting down shorter-range ballistic missiles as well as aircraft.

He said he approved the deployment “so that we can help Turkey have the kind of missile defense it may very well need to deal with the threats coming out of Syria,” he said.

In a statement issued Friday NATO spokeswoman Oana Lungescu said “the deployment will be defensive only.”