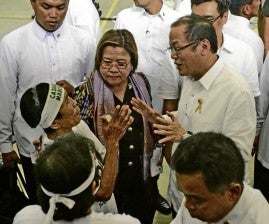 LET’S OPEN OUR MIND In a meeting with protesters, President Aquino talks with a Casiguran farmer who says he does not agree the concept of development behind the Aurora Pacific Economic Zone and Freeport Authority will lift him from poverty. At center is Justice Secretary Leila de Lima. MARIANNE BERMUDEZ

Meeting the protesters’ demands halfway, President Aquino on Monday ordered a review of the country’s first economic hub rising at the edge of the Pacific but rejected calls that he cut off funding and scrap the project altogether.

Some 120 farmers, fishermen and indigenous people (IP) were set to proceed to Malacañang on Tuesday in the final stretch of a 350-kilometer, 18-day march to dramatize their opposition to the project, but the President and his Cabinet officials instead went to San Jose Seminary at Ateneo de Manila University to listen to their concerns.

In a tense, emotional dialogue at the seminary gym, the President defended the Aurora Pacific Economic Zone and Freeport Authority (Apeco) project, saying he believed the pet project of Sen. Edgardo Angara would benefit Central Luzon.

He, however, agreed to a review of the 12,923-hectare project, giving the National Economic Development Authority (Neda) a week to study whether it should be scrapped.

“Why don’t I set up a meeting with Neda? I’ll ask them when they will be ready; you present them all your views. I have just one request: let’s open our minds,” he said. He agreed to a proposal that residents of Casiguran should be represented in the meeting.

The President indicated that the Commission on Audit should also look into the project.

Mr. Aquino ordered the Commission on Higher Education (CHEd) to “lend” a portion of the 110-ha prime agricultural land inside Aurora State College of Technology (Ascot) to indigenous people, until the commission decides to take it back for a concrete project.

The President directed the Department of Environment and Natural Resources to renew the stewardship contracts of IPs under the Integrated Social Forestry Program in Apeco-covered areas for 25 years once they expire in 2014.

In the end, the farmers, fisherfolk and IP who trekked from Casiguran to Manila on Nov. 24 emerged unsatisfied by the solutions offered by the President.

Their supporters, including Christian Monsod, bewailed that the President asked Apeco officials, including Malcolm Sarmiento, to be present at the dialogue.

Representatives of the marchers tearfully recounted what they said was a threat posed by the project to their livelihood. They asked the President to scratch the P350-million annual budget for the project and scrap it altogether.

The marchers representing 2,983 families have accused Apeco of seizing large tracts of prime agricultural lands and intruding into the ancestral lands of the Agtas without free, prior and informed consent, and displacing fisherfolk families with its construction of an airstrip.

They claimed that the law was passed without any consultation, and that Apeco was established without the approval of the Casiguran local government unit in violation of the Local Government Code.

Apeco was created through Republic Act No. 9490 in 2007, and was amended through RA 10083, which lapsed into law in 2010. These laws were sponsored by Senator Angara and his son, Aurora Rep. Juan Edgardo Angara, who is a senatorial candidate of the ruling Liberal Party in next year’s election.

In a statement, Senator Angara welcomed the President’s actions.

“Our intentions for Apeco, and Aurora, have always been transparent: to help my province catch up with the economic and social development of the rest of Luzon,” he said.

“We agree with the President that Apeco and its funding cannot be stopped solely on the basis of these protests. There is a silent majority in Aurora who stand to gain from the employment, livelihood, investment and tourism that Apeco will help generate. While we address the issues of protesters, we cannot ignore the desire of the majority of Aurorans to see their province and their lives prosper.”

Mr. Aquino admitted that as a senator, he voted for the bill creating Apeco, viewing it as another means to boost livelihood opportunities in the region. He said there was no such seaport in the “whole Pacific side.”

Once the Neda has established the facts, only then could the government decide whether to push through with the project or at the least, discontinue the allocation for it, the President said.

“If it comes out that the economic assumptions are vague, then we go back to the House of Representatives and the Senate, and tell them: Let’s amend this law, or recall it,” he said.

“But then again, what if it’s right? Here, there is a chance. You remove this project, there is no chance … We really need to determine if this project is worthless before we cancel it,” he added.

After listening to the President, Monsod rose to point out that his solutions were not exactly those being sought by the marchers.

“Their question is whether the economic zone is a valid and a good project. The solutions that we are hearing, while they sound good, do not address that basic premise. That’s why they’re asking for a thorough review of the concept itself of Apeco in that area,” Monsod said, drawing applause from the audience.

“We can’t find an economic justification for the project. As a matter of fact, the locators are not there yet. Even Senator Angara admitted that these locators have no feasibility studies,” he added.

Fr. Xavier Alpasa, executive director of Simbahang Lingkod ng Bayan, asked the President to respond to allegations on the nonconsultation of the IPs and the “conversion of irrigated land”  the IPs had cultivated.

Mr. Aquino interrupted Alpasa before he could finish, and pressed him for details about the conversion of irrigated land.

“Irrigated land converted by who? Who is converting? Don’t make an accusation. What’s the fact,” said an annoyed Mr. Aquino. He then turned to one of the IP, and confirmed that they were still planting in the land.

As the exchanges grew more intense, a man from the ranks of the IP told the President that the “development he was speaking of” was different from “our concept of development,” to applause and hoots.

“Our brand of development is to enrich our land. That’s why we even banned one company from logging in San Ildefonso,” he said, referring to Industries Development Corp. which they said was paid P120 million by Apeco for logging rights. “Apeco has its own law. We have our law as IPs that was violated by Apeco.”

“If they suddenly start building structures that destroy the forest cover, then you tell me because we can cut off the funding,” Mr. Aquino said.

Another man from the IP group rose to ask the President if the enactment of a law concerning a small land without public approval and concurrence of local government unit didn’t amount to “land grabbing.”

“How come the law is still being implemented when there’s no consultation and concurrence?” he wondered. “Who is Ascot and who is Apeco?”

The President then turned to Agrarian Reform Secretary Virgilio de los Reyes who explained that the irrigated rice land could not be converted for another purpose.

The President then asked: “Are you proposing that if there’s idle land, you should occupy and own it?” This elicited murmurs from the audience.

As the country’s CEO, Mr. Aquino said he had to execute and implement the law, including the Apeco law, for as long as it remained in effect.  With a report from Jeannette I. Andrade