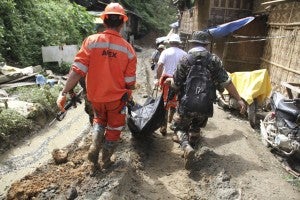 MANILA, Philippines—The death toll from the strongest typhoon to hit the Philippines this year has climbed more than 700 with hundreds more missing, many of them tuna fishermen feared lost at sea, the government said Tuesday.

Typhoon “Pablo” (international name Bopha), which unleashed floods and landslides across the main southern island of Mindanao on December 4, has killed at least 714 people and obliterated entire communities, the civil defence office said.

It said nearly 115,000 houses were destroyed and more than 116,000 people remain in crowded government shelters, where they face months of waiting for new housing to be built.

A total of 890 people remain missing, but officials have said some of them could be among the 257 corpses that have been retrieved by rescuers but remain unidentified and unclaimed by relatives.

The missing also include 313 deep sea fishermen who set off from the country’s main tuna processing port of General Santos in Mindanao days before “Pablo: hit land, and were never heard from again.