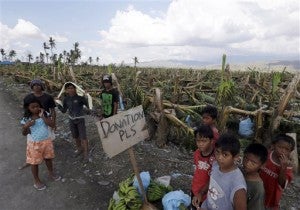 Residents affected by typhoon Pablo beg for aid from passing motorists along a highway at Montevista town, Compostela Valley, on Sunday, Dec. 9, 2012. The death toll from Pablo has climbed to 647 as rescue workers continued to search for 780 individuals who remained missing as of Monday, the National Disaster Risk Reduction and Management Council said. AP PHOTO/BULLIT MARQUEZ

MANILA, Philippines—The death toll from typhoon “Pablo” (international name” Bopha) that struck several provinces in the Visayas and Mindanao last week has climbed to 647 as rescue workers continued to search for 780 individuals who remained missing as of Monday, the National Disaster Risk Reduction and Management Council (NDRRMC) said.

Benito Ramos, NDRRMC executive director, said the government has been preparing for a possible mass burial of at least 217 unidentified victims whose remains were still unclaimed by their relatives.

Out of the total number of fatalities, he said 400 were already identified and retrieved by their families.

In Compostela Valley and Davao Oriental alone, the military reported that 641 residents died due to falling trees, flashfloods, landslides and other incidents triggered by the powerful typhoon.

“If nobody will claim the bodies in the next 48 hours, we may bury them in mass graves. But all the bodies will be placed in caskets and will be tagged,” Ramos told reporters.

He said the government had prepared at least 500 caskets for the unclaimed cadavers “so there is semblance of decent burial.”

“For those looking for their relatives, we urge them to coordinate with the municipal health officer to check if their loved ones had already been buried,” Ramos said.

In its latest report, the NDRRMC said 1,482 people were injured while 109 were rescued in typhoon-hit provinces in Mindanao and Visayan regions.

It said a total of 487,364 families composed of 5,412,140 individuals in 38 cities and 30 provinces in nine regions were affected by the killer typhoon, which spawned floods, landslides and storm surges.

According to the NDRRMC, a total of 133,892 persons are still staying in evacuation centers. It said the typhoon damaged 70,869 houses.

The agency placed the damage to infrastructure, agriculture and private properties at P7.1 billion. The Department of Agriculture said 26,610 hectares of crops in 18 provinces were destroyed by floods.

“The report does not cover the damage to banana and coconut which are (still) being assessed,” the NDRRMC said.

The government has so far provided some P52.8 million worth of relief items and assistance to flood-hit municipalities.