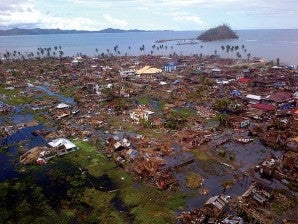 FLATOUT BROKEN The view from the air of Boston town in Davao Oriental province shows the massive devastation wrought by Typhoon “Pablo” on Tuesday morning. The President said he will declare a state of calamity. REY MARFIL/CONTRIBUTOR

GENERAL SANTOS CITY, Philippines– The Philippine Navy and the Philippine Coast Guard have launched massive search and rescue operations in the high seas off the coast of Surigao and Davao Oriental to look for 315 missing fishermen, who are based in this city.

This developed after 50 fishing vessels owned by eight different fishing companies here remained missing a week after Typhoon “Pablo” battered most of Mindanao.

Navy Capt. Robert Empedrad, commander of Task Force Maritime Search and Rescue for General Santos and Sarangani, said the Navy will use two aircraft, two Navy ships and two other patrol boats of Philippine Coast Guard in the search and rescue operations.

Empedrad said the operations will last for three to five days in the Philippine territorial waters off Surigao and Davao Oriental, all the way down to the rich fishing grounds near Indonesia.

“Then, depending on results, we will decide after that whether to continue the search and rescue efforts,” he said.

Jake Lu, a fishing boat owner, expressed optimism many of the missing fishermen from here are still alive.

Lu claimed that many of the missing fishermen are aboard the mother boats.

Eleven out of 50 missing fishing vessels are mother boats. The rest are light boats and carrier boats.

“There’s a possibility that the missing fishing boats just drifted somewhere else. Either they ran out of fuel or their communication gadgets were destroyed by the typhoon, the reason why they lost contact with their employers,” Lu said.

Lu explained that the 50 missing fishing vessels were either on their way back home while others just sought sanctuary somewhere near the Surigao coastline when the typhoon hit them.

In an earlier report, the Coast Guard in Manila placed the number of missing fishermen at 310 and the missing fishing vessels at 45.