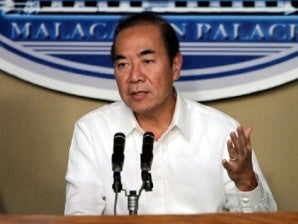 MANILA, Philippines—The Department of Public Works and Highways (DPWH) will require all its personnel, as well as its project contractors and suppliers, to sign an “Integrity Pledge,” citing the agency’s intensified campaign against graft and corruption.

The DPWH initiative is in line with President Aquino’s Proclamation No. 506 designating Dec. 9 National Anti-Corruption Day, taking note of the signing of the United Nations Convention Against Corruption on Dec. 9, 2003, by 140 United Nations member countries, including the Philippines.

The drive also aims to “address the collusion (between DPWH staff and private contractors) and other bid rigging practices of the past.”

“We will also work towards electronic bidding by 2013,” Singson said.

The Inquirer has obtained a copy of the DPWH Integrity Pledge, which says that corruption “undermines democratic processes, impedes social, political and economic growth, and erodes the moral fiber of our society.”

“The responsibility to operate our affairs ethically and with utmost integrity rests on our shoulders as government workers,” the pledge says.

“Our government’s initiative to prevent corruption will only succeed with the support of all stakeholders by cultivating a culture of transparency, accountability and integrity essential for creating an enabling environment and sustainability in governance,” it says.

DPWH personnel and contractors are required to take a vow to “combat graft in any form and in all activities” and “ensure transparency by implementing strict guidelines on the receiving and giving of gifts, making contributions to charitable or political groups, project sponsorships and other tokens.”