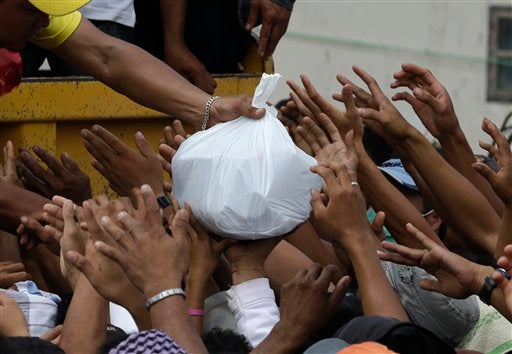 Residents affected by typhoon Pablo (Bopha) crowd as relief goods are distributed at New Bataan, Compostela Valley, on Sunday Dec. 9, 2012. Authorities fear that the death toll due to typhoon Pablo could reach 1,000 as almost 600 bodies have been recovered in the two hardest-hit Mindanao provinces. AP PHOTO/BULLIT MARQUEZ

TAGUM CITY, Philippines—Authorities fear that the death toll due to typhoon Pablo (international codename: Bopha) could reach 1,000 as almost 600 bodies have been recovered in the two hardest-hit Mindanao provinces.

The stench of rotting bodies have become unbearable, prompting rescuers to immediately bury the bodies after they were found, said Capt. Raul Villegas, of the Army’s 10th Infantry Division, based in Mawab town, in Compostela Valley.

“We are still hoping we can find survivors,” Villegas said on Sunday. “But the chance (of finding anyone alive) is getting thinner by the hour.”

Search operations on the fifth day after the disaster were concentrated in the devastated town of New Bataan, where sniffer dogs have been deployed to lead teams from police, Army and rescue groups to bodies buried under fallen trees or thick mud that enveloped a large swathe of the desolate town.

At least 316 bodies have been found in Compostela Valley, 165 of them in New Bataan alone. The death toll there included four soldiers belonging to the Charlie Company of the Army’s 66th Infantry Battalion, said Villegas.

At least 441 people are still missing in New Bataan, and 20 others in other areas of the 11-town Compostela Valley.

Villegas said Davao Oriental has recorded 276 dead, including 122 in Baganga and 103 in Cateel municipalities. About 61 persons are still missing in that province.

Villegas said search operations would not be stopped, “’til we can.”

He said identification of the bodies has been a problem due to the heavy stench.

“The bodies are buried immediately with the consent of the relatives,” the military official said.

In Cateel, Davao Oriental, boys and girls are either just loitering aimlessly on the streets, helping their parents in the many tasks at hand, or are begging for food.

Darryl Blatchley, a member of a religious ministry in Davao city, who arrived with a jeepney loaded with relief goods, was overwhelmed with what he saw in the town.

“The villagers badly need food and we have yet to go to remote areas where people are in great need. It’s so sad that help has not reached to their area yet,” he said.

Due to the lack of resources, some villagers opted to bury their dead relatives in the lot where their houses once stood.

“Several of our neighbors had no choice. They do not have money to have a decent burial for the dead,” said Jerry Terio, 40, who has been helping his brother-in-law, who lost his parents and several other family members.

Liza Ayeng, 43, expressed her frustration over the fact that help from the government has not arrived.

“We have asked local politicians for help, but they just told us they have nothing to give,” Ayeng said.

Residents in Baganga town have also complained that they have not received relief goods from the government. They said relief goods were poured in Cateel, the hometown of Governor Corazon Malanyaon.

Leonor Escodillo said she had to leave Baganga for Mati City because they were getting hungrier by the day.

“Walang dumating na relief galing sa gobyerno. Mabuti pa ang GMA 7 nagbigay (No relief goods came from the government. It’s a good thing GMA 7 (television network) gave,” said Escodillo, who was with her one-year-old son on a bus to Mati City to live with her sister.