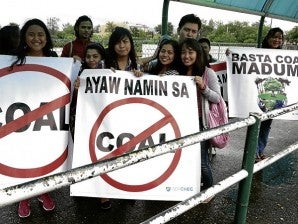 SUBIC, Zambales—The Subic Bay Metropolitan Authority (SBMA) will not entertain any proposal to put up another coal-fired power plant in the free port zone, according to the agency’s top official.

“It’s not going to happen. We won’t allow that,” said SBMA Chair Roberto Garcia, reacting to reports that Korea Electric Power Corp. (Kepco), an energy firm owned by the South Korean government, is pushing through with its plan to build a 200-megawatt coal-fired power plant that will supply the electricity requirements of Korean shipbuilder Hanjin operating inside the free port.

Garcia made the statement on Friday when he joined the kickoff ceremony of the Malampaya gas-to-power project’s latest platform project here.

Kepco, he said, is not a Subic locator and has no role in Subic Freeport affairs. Garcia said Kepco had not submitted any proposal to build the power plant either.

On Friday, the Inquirer quoted Kepco president Kyu-Beng Hwang as saying, “Pursuant to the memorandum of understanding (MOU) signed between the governments of the Philippines and Korea, Kepco is still interested in putting up a power plant with Hanjin in the Philippines.”

The MOU stipulates that the coal-fed facility would be put up inside the Subic eco-zone to serve the electricity requirements of Hanjin Heavy Industries and Construction Ltd.-Philippines Inc. (HHICPI), the biggest locator in the free port.

But Garcia said the MOU did not involve SBMA, which has disavowed any commitment to the Kepco arrangement with the Department of Energy.

“As I understand it, they have already changed the location of the project to Bataan [instead of Subic],” Garcia said.

He said no coal-fired plant would rise in Subic under his watch. “If another coal plant were added to Subic Bay, it would mean the death of the Subic Freeport,” he said.

He said Kepco might have been pushing for the 200-MW coal plant for Hanjin because the Aquino administration had committed to supply the Korean shipbuilder with cheap power, which is an incentive for the company to locate here.

Under Executive Order No. 701 by former President Gloria Macapagal-Arroyo in 2008, the National Power Corp. and the National Transmission Corp.  would provide Hanjin discounted rates of $0.0491 per kilowatt-hour (kWh) in the first six years of its operation and $0.0600 per kWh from the seventh year until the 10th year in its shipyards in Subic Freeport and in Mindanao.

The commitment was justified by the fact that Hanjin would create 50,000 jobs and infuse $3.6 billion worth of investments in the country.

The Palace directive stated that there was a “need for the concerned government entities to support the investment of [HHICPI], particularly its power requirements.”

Garcia said the Aquino administration was already addressing Hanjin’s power needs and that they were close to reaching an agreement.