Doll for Life: A mom’s fight vs cancer

Or how an ‘obsession’ has helped save a child’s life
By: Candice Yvette Palenzuela-Dalizon - @inquirerdotnet
Philippine Daily Inquirer / 10:58 PM December 08, 2012 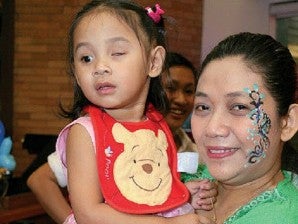 WITH the cancer believed to be in remission following chemotherapy and the removal of her left eye, Bel attends a birthday party in 2011 with her mother, Arlyn. CONTRIBUTED PHOTO

WHEN Arlyn Quilalang Bautista gave birth to her fourth child Chariabella or Bel on July 29, 2009, she had no inkling that her life, as well as that of her family, was about to undergo an upheaval.

“Chinese people believed the date to be an auspicious [one]. Never did it cross my mind that Chariabella’s birth would bring about challenging times for the family,” the 41-year-old Bautista said in a recent interview with the Inquirer.

Bel, who is now 3 years old, seemed healthy enough at the time she was born at Mt. Alvernia Hospital in Singapore. At that time, Bautista and her family were staying in the Lion City since her husband, Candido, had landed a job as an architectural coordinator. The couple have three other children—Daeniel Luis, 16; Candicia, 8; and Don Candido, 4.

Two months after she gave birth, Bautista spotted a white glow in Bel’s left eye which looked like a cataract, prompting her to take her daughter to a pediatric ophthalmologist.

The doctor’s diagnosis left the family devastated: Bel was suffering from Bilateral Retinoblastoma, an aggressive form of eye cancer in children which affects the retina. A white glow in the eye is the most common early sign of the disease.

The two-month-old baby immediately underwent a battery of diagnostic tests which included an MRI (Magnetic Resonance Imaging) of the orbit and brain, bone aspirate and auditory exams, plus numerous blood tests to check her liver and kidneys.

This was followed by an operation a month later in which doctors removed Bel’s left eye. She also went through nine cycles of chemotherapy and focal laser therapy to save her other eye.

As Bel’s condition improved, Bautista decided to come home for good with her children in April 2011 as she felt she would be able to deal better with her daughter’s condition with her family and friends by her side. Her husband could not leave his job so he stayed on in Singapore.

“When we came back, I practically had nothing to do—no income, just a plain housewife and a hands-on mother to four hyperactive but gifted children,” she recalled to the Inquirer.

However, cancer care and the reality of rearing a child with a visual impairment could be financially draining—a situation Bautista likened to being on a treadmill of financial stress every single day.

Call it serendipity but several months later, a friend from high school, Leah Lituania-Hermogino—who remembered Bautista’s  interest in dolls and her creative flair—contacted her to ask if she was interested in making dolls for a Rotary Club event.

Bautista immediately said yes. “I was determined to deliver and I prayed I would be able to find seamstresses and hire them on a contractual basis,” she added. 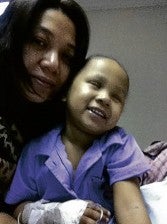 DESPITE surgery to remove her remaining eye, Bel remains cheerful and energetic, according to Arlyn. CONTRIBUTED PHOTO

Luckily, she found the right people for the job. After brainstorming, they came up with the design for soft dolls about 15 to 17 inches in height made from polyfiber materials. The dolls were sold at P499 each.

“I’m really thankful to Stella Maris College Batch ’87 for their trust and support. This led to word of mouth referrals,” she said. Soon, Bautista was busy making dolls for various schools and organizations. She named her venture “Dolls for Chariabella” and later on, “Doll for an Eye.”

Early this year, Bautista was asked to make AB (Bachelor in Arts) Thomasian dolls. Dressed in a blue A-line skirt and white top, the University of Santo Tomas (UST) Arts and Letters uniform for girls, the dolls were initially offered within the group and on Facebook.

“The dolls come with a note which says, ‘Doll for an eye.’” This refers to the fundraising project for Chariabella,” she said.

In March, Bautista met Paolo Rivera, an active member of the UST Alumni Relations, who promised to help sell her dolls at the UST Arts & Letters “2nd Gantimpala Awards Night” at Club Filipino in San Juan. He also gave her other orders, including one from the UST basketball team.

“I chose her dolls because I wanted to help Chariabella. They need funding for her chemotherapy. The dolls are beautiful and the price is reasonable,” Rivera said.

In June, however, the cancer came back, this time, manifesting itself in Bel’s right eye and giving doctors no choice but to remove it. This led to another operation in August, leaving the child completely blind.

At present, Bel continues to undergo chemotherapy to remove any remaining cancer cells. According to her mother, she is doing well despite the unpleasant side effects which come with treatment, even hair loss.

“Her endurance never wanes and she is a born fighter. She doodles a lot and is physically active,” Bautista said as she added, “She always charms us with her cheerful aura and sweetness.”

Just recently, Bautista changed the name of “Doll for an Eye” to “Doll for Life.” She also introduced a new line of dolls, the Kalby bald dolls.

“These dolls which have no hair wear a shirt with the message ‘HOPE for Retinoblastoma.’ I was inspired to do these dolls in celebration of Childhood Cancer Awareness Month last September,” she said.

“I am a hopeful woman. This is one thing I have lots of. I am an advocate of hope. What makes me hopeful? Believing in God and in His powerful ways,” she added.

Bautista is aware though that the journey is far from over. One thing is certain, however. She will do everything for her kids. 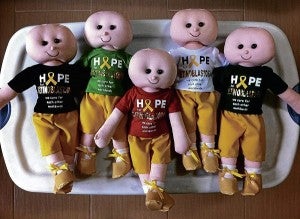 The new Kalby bald dolls have the word HOPE printed on their shirts. CONTRIBUTED PHOTO

“How can I reassure my children that everything will soon be fine? I cannot offer them everything. To my children, no matter what or where this leads us, Mommy is here for all of you to take care of you and fight for your rights. Daddy and I will try to protect you the best we could,” she said.

Bautista also never fails to thank her other kids Daeniel, Candicia and Don for being understanding and kind to Bel.

“To you Bel, we will be your eyes and we will help you fulfill your vision in life,” she said.

The Doll for Life collection will soon be available online in cooperation with Daisy’s Eye Cancer Fund (www.daisyfund.org), United Kingdom with branches in Canada, USA  and Kenya. For inquiries, call 0921-5736438 or e-mail [email protected]