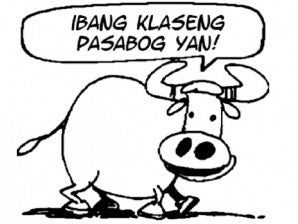 The assistant health secretary and director of the National Epidemiology Center is cashing in on the phenomenal Korean horse-riding dance craze, which he believes is more “explosive” than illegal firecrackers such as the “Pla-Pla,” “Super Lolo” and “Goodbye Philippines.”

But should Tayag not stamp and twirl to the watusi—a solo dance that enjoyed brief popularity during the early 1960s—which was actually what inspired the firework’s name?

The seemingly harmless traditional fireworks, brightly colored long sticks that produce sparks and noise when rubbed against the ground, have taken the lives of adults and children alike each year.

Efforts to ban the small firecracker, however, have proved futile.

But of course the watusi dance is almost stationary, compared to the hop-on-the-horse Gangnam Style that would definitely draw more attention from the young generation.

Which was probably why the Department of Health (DOH) launched its annual antifirecracker campaign yesterday with Tayag leading employees in gyrating and pivoting to South Korean pop artist Psy’s hit song “Gangnam Style” as the agency launched “Aksyon Paputok Injury Reduction, (APIR) Iwas Paputok” in a bid to reduce injuries and prevent deaths resulting from firecracker or fireworks use during the Christmas and New Year revelries.

According to Tayag, they are using the popular dance craze not only to entertain people, but more importantly to entice them, especially the children, to look for safer means of merrymaking.

“This (dancing) is much more fun than using firecrackers to celebrate the season,” the DOH official said, as he urged people to join street parties or participate in community fireworks display.

He said this year’s campaign will focus on children aged 6-10 as statistics show that this age group is usually the most affected.

In 2011, a total of 274 children in this age group became victims of firecracker use.

It also cautioned parents and caregivers against giving children easy access to firecrackers, which are readily available in neighborhood stores.

The DOH added that the piccolo, a small tubular whistling firecracker that is considered illegal, has remained the top injury-causing firecracker, followed by legal fireworks such as kwitis and luces, among others.

“They can also download for free the sound effects of various firecrackers such as 5 star, super lolo, Juda’s belt, watusi, whistle bomb, kwitis, luces, trompillo and fireworks symphony, which we uploaded in our website last year,” the DOH said.

“Most of all, use the time to reflect on the lessons of the past year and make resolutions for a better 2013,” it added.

But for those who cannot stop the urge to light fireworks, the DOH advised them to seek immediate medical treatment, once injured, to prevent infections which may lead to death.

The DOH has lately been using popular tunes to boost its various campaigns. Last June, Tayag also led a group of men and women in a flash mob activity in Makati City to promote exercise as a main component to healthy living.

The mob dance was designed to advance exercise as part of the Filipino lifestyle to combat top killer noncommunicable diseases such as strokes, cancer and heart attacks.

Last year, Tayag also spiced up the Quezon City government’s antidengue campaign when he topped his speech with a performance of Shakira’s “Waka-waka,” a popular song-and-dance number.